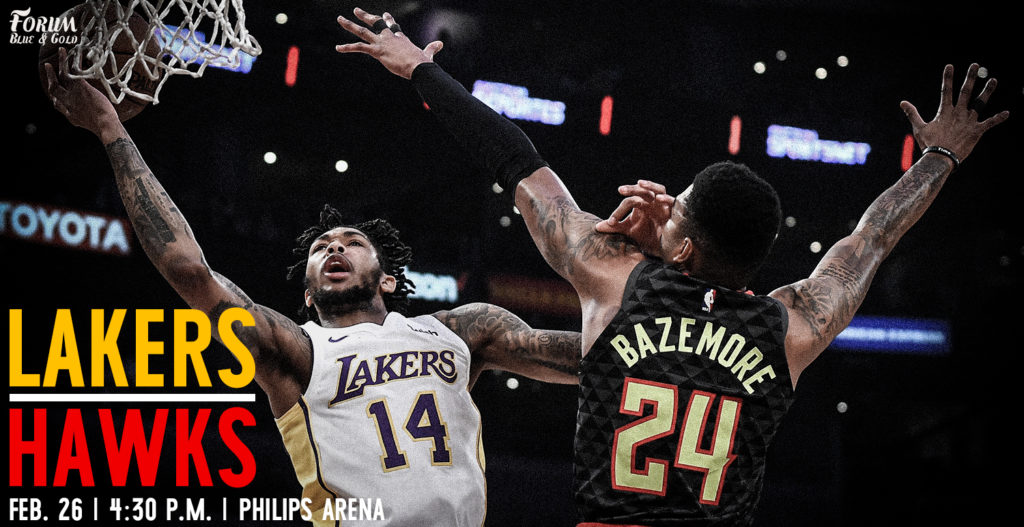 After dropping 3 straight heading into the All-Star break, the Lakers have won two in a row coming out of it. Their latest victory was a 113-108 win in Sacramento on the 2nd night of a back to back. That game wasn’t the prettiest affair, but a hot shooting night from Kentavious Caldwell-Pope (34 points with 8 three-pointers), a workman effort from Julius Randle (13 rebounds), some bench pop from Isaiah Thomas (17 points), and another well rounded steady night from Brandon Ingram (12 points, 7 rebounds, 8 assists) carried the team to a W.

The road show continues tonight, though, with a trip to Atlanta. Much like the Kings, the Hawks are not good. Further, the Hawks (like the Mavs from Friday night) would probably much rather lose this game than pull out a W. At 18-42, Atlanta is only a half-game out of the worst record in the league and the most ping-pong balls in May’s draft lottery. For a team that does not often compete for top free agents, nabbing one of the draft’s best players is (or at least should be) a major priority — and is something the Hawks, as a franchise, seem to recognize.

What this means for tonight is two-fold.

First, just because the Hawks might be tanking as an organization does not mean the players on the court will be. I expect the Hawks to play hard and for their players to come out looking to win this game. The Lakers, then, cannot fall complacent or think they have an inside track for a W simply by showing up or that a substandard effort will get them the results they seek.

Players like Dennis Schroeder, Kent Bazemore, rookie John Collins, and others are going to come out and play hard. If the Lakers think otherwise, they’ll find themselves in a dogfight early. Which can tend to linger as a game goes on — especially on the road. See the game vs. the Kings.

Second, and maybe more important, is that the Lakers have an opportunity to continue to win by playing a game against a bad team that may not be putting its best foot forward. As I noted on twitter earlier today, the Lakers already have 25 wins with 23 left to play in the year. If they play .500 ball the rest of the year, they can get to 37 wins — 10 more than they won all of last year. That would be a major accomplishment for a team looking to make a splash in free agency this summer.

In other words, these games matter to the Lakers for the exact opposite reason they matter to the Hawks. And I’d like to see them take advantage of these types of games specifically. Because, when it’s all said and done, no one is going to remember that you beat the Kings/Hawks of the world when they see your final record. They’re just going to see that win total. So pile them up against the teams you have a good opportunity to stack them against.

Where you can watch: 4:30pm start time on Spectrum Sportsnet.