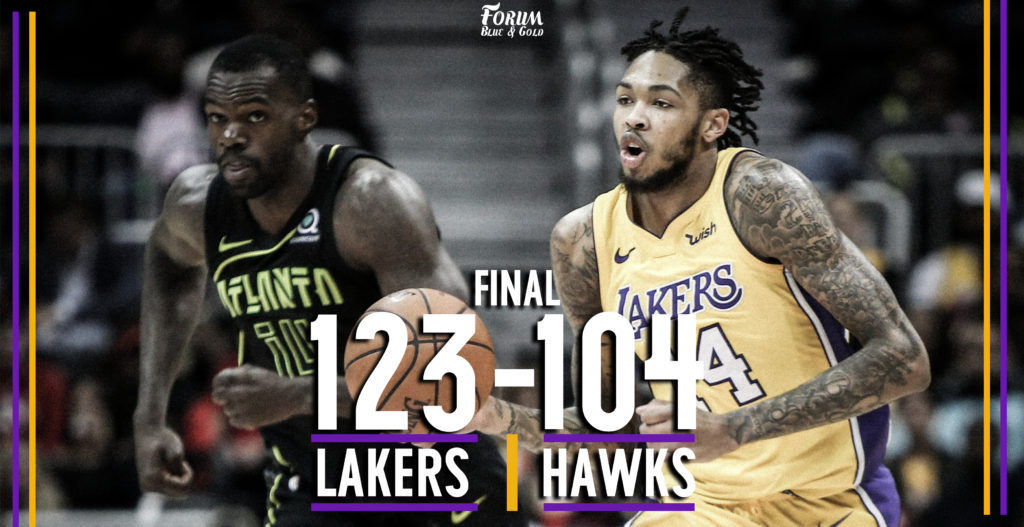 The Lakers went into Atlanta and dominated the Hawks 123-104 to win their 3rd straight game coming out of the All-Star break. Playing their 2nd game of a 4 game road trip, the Lakers stepped on the Hawks early, jumping out to a big lead that the Hawks would chip away at, but never really threaten. The result was a fairly comfortable win even though the Lakers didn’t play their best ball.

That last point is meaningful because if you listened to Luke Walton after the game, you’d barely know the team won the game. The Lakers 23 turnovers clearly bothered the head coach, indicative of a sloppiness he insisted the team needed to “clean up” if they wanted to continue to be on the right side of the ledger when the final buzzer sounds. Some of this is surely coach speak — finding a way to keep your team grounded even after a blowout win — but some is also indicative of Walton’s season long quest to develop the right habits in his players; his want to establish the “right way” for his team to play night to night.

And while this is very real for the coaches and the players, for the fans it’s easier to simply sit back and enjoy this for what it was: a butt kicking that the Lakers were on the good side of. Further, it has greater significance in that it was the 26th win of the Lakers season — the same number of games the team won last year. For a team looking to make real strides forward, matching their previous seasons’ win total with 22 games left in the season confirms they are on the right trajectory and building the right sorts of habits.

It also confirms the development of the team’s young talent. Most notably, Brandon Ingram. The slender forward scored 21 points, grabbed 10 rebounds, dished 6 assists, and blocked 3 shots in the win vs. the Hawks. He joined Shaq, Kobe, and Pau as the only Lakers to reach those thresholds in those categories in a game since the 1999-2000 season. And he did it without playing a second of the 4th quarter.

Ingram turned the 3rd quarter into his personal showcase, slithering into the lane for lefty finishes, hitting a sweet pull up jumper on a P&R, and sneaking in behind the defense for a power dunk over a late rotating defender (and off a sweet pass from Julius Randle). The Hawks had started to claw back into the game to start the 2nd half, but Ingram ended all that and restored order to the game. When he checked out, the Lakers were firmly in control — a control they never came close to relinquishing again.

Though Ingram’s game was the catalyst for this win, he was not alone in playing well. The Lakers had 9 total players score in double figures this game and all of them did good work to take advantage of a lacking Hawks defense. Be it Lonzo Ball’s perfect shooting night (4-4 from the field, 3-3 from distance), Julius Randle’s 15/10 double-double, Josh Hart’s 14 points while making 3-6 from beyond the arc, or Brook Lopez spacing the floor to the tune of 11 points with 3 made threes of his own, nearly every Laker was efficient and helped this be the blowout it was.

My final thought, though, is on Isaiah Thomas. Thomas hit 4 of his 10 shots for 13 points and dished out 5 assists. It was not his most productive game since coming to the Lakers, but I’d argue it was his best. Offensively, while maintaining his aggression, he did not force as many shots and was less the ball dominant player he’s been since the trade.

He shared the ball-handling duties with Lonzo and Ingram and really was more judicious in the types of shots he fired up. I still thought a couple of his pull-up jumpers off the dribble were bad shots, but a player of his ilk is never going to eliminate those fully and that’s fine. What I want to see, though, is more of the understanding that the ball can and will make its way back to him if he’s patient and that some of the shots he takes early in the clock will be available later in possessions too. Against Atlanta, he showed he understood this better.

Defensively, too, I thought he was much better than he’d been in previous games. He rarely went under screens being set on him, he did a better job of executing rotations when put in help and recover situations, and overall he did not “die” within possessions as often where he just ends up standing and watching. He was by no means perfect out there and it’d be fairly easy to find examples of poor defense from him during his nearly 27 minutes of court time. But I thought he was better defensively and was closer to the level the team will need him at considering the size of role he’s going to have over this last stretch of the season.

Overall, then, I walk away from this game pretty much happy as I can be. The Lakers won and did so convincingly. As we wrote before the game, this was a contest that the Lakers easily could not have taken seriously, but that was not the case at all. They’re clearly a better team than last year and the arrow is trending up at a time of the year the franchise really needs it to.