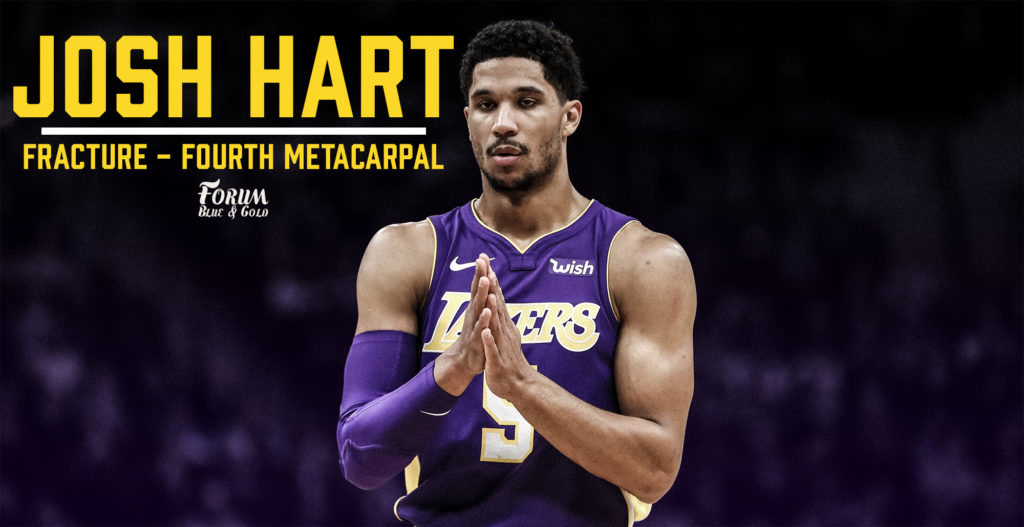 On the same day the Lakers diminished their wing depth by executing a contract buyout with Corey Brewer, they suffered another blow that puts their perimeter rotation in peril when Josh Hart broke his hand in practice.

Hart has been starting since early February, a shift that saw Brandon Ingram move to point guard and Tyler Ennis banished to garbage time. Hart had been playing “small forward”, offering a toughness defensively and on the backboards, skill as a shooter, and a polished craftiness finishing at the rim. Losing Hart, simply from the standpoint of what he offered as a player, hurts.

Further, though, is that the Lakers have already compromised their depth on the wing and were likely looking at Hart to maintain (if not increase on) his significant role. Beyond Brewer being waived, the team jettisoned Jordan Clarkson at the trade deadline and his replacement is, essentially, a small PG (Isaiah Thomas) who offers little to no positional versatility.

This leaves the Lakers either scrambling for external replacements or shifting roles for players currently on the roster to try to soak up those minutes. A few potential internal solutions**:

All of those things work hand in hand and I would not be surprised to see Luke take a little from all four bullet points to piece together a solution should the team not sign anyone from the outside.

If the team does look for outside options, they could try to bring back Nigel Hayes on a 10-day contract (Hayes is back with the Weschester Knicks in the G-League after the Lakers did not keep him on after his 1st 10-day deal), they could revisit the idea of signing Jamil Wilson (who they were going to sign before he ended up being accused of giving a woman an STD in a civil lawsuit – WELP), they could bring up Gary Payton II from the South Bay Lakers, they could bring up Alex Caruso to play in two PG lineups (next to Lonzo or IT or Ingram), or they could canvas the G-League/free agent market to find someone.

Whatever route they choose, though, it’s unlikely that player will approximate what Hart has been bringing to the team since becoming a fixture of the rotation. Hart’s work on the glass, ability to defend multiple positions, and improvement as a long range shooter all while being a low usage “role player” isn’t a readily available package around the league. It’s one of the main reasons fans are so high on Hart’s future.

So, get well soon Josh Hart. Maybe you can return this year, but I’m guessing we’ve seen the last of the rookie until summer league.

**A few people asked me about the potential of Luol Deng being exhumed and inserted into the lineup to snare some of these available minutes. I do not see this happening for a variety of reasons.

Whether you believe Deng’s relationship with the organization is frayed or not (and I don’t think it necessarily is — I think they both know the score here and the team wants to make a move that works for them and Deng), bringing him out of mothballs now would be, for lack of a better word, insulting to him and his professionalism.

I don’t care what Deng makes in salary, using that money as justification for the team to now telling him to go out there and play speaks to a tone-deafness about player/team relationships after shutting him down for the entire year when he said the entire time “I’d like to play”. Not letting him do that on its merits and then only telling him to suit up because you’ve traded/waived players and then suffered an untimely injury would be a slap in the face. And I think the team is smart enough to know this.

Further, Deng is no longer a “wing” in this league. I know it and I think the coaches and Deng know it too. During the off-season Deng said he wanted to play more PF. After an opening night experiment where Deng started for the suspended KCP on the perimeter and the Lakers stunk it up, I think the coaches resigned themselves to this fact too. Trying to solve your wing depth problem with Deng at this stage is akin to putting a band-aid over the wounds from a great white shark attack.

So, yeah, the Lakers aren’t going to turn to Deng.