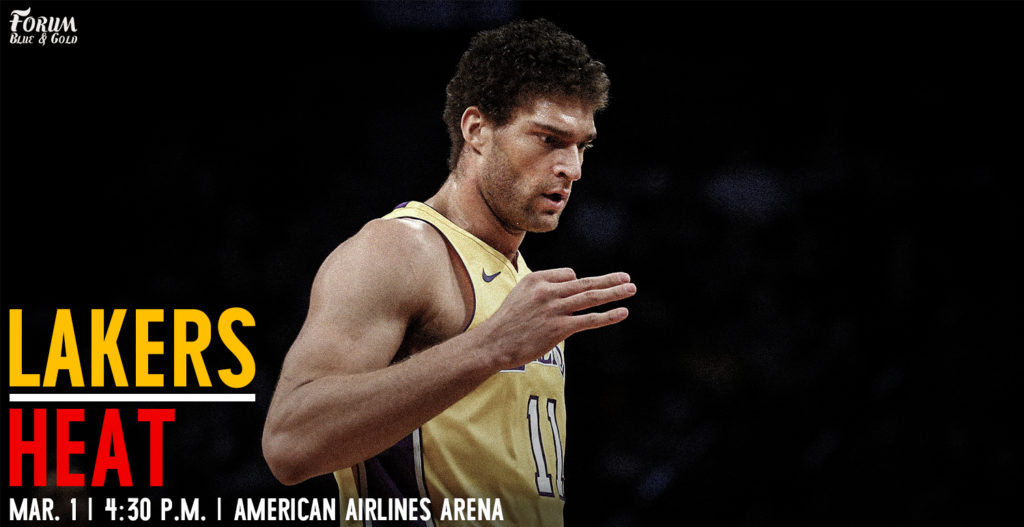 The Lakers are undefeated (3-0) since the All-Star break, including two straight road wins. Their most recent W came in Atlanta, and was of the wire-to-wire variety that they’d not experienced all season. Things are looking up, then, right?

The Lakers were dealt a serious blow on Wednesday when Josh Hart broke his hand during practice. Hart will be out indefinitely and has flown back to Los Angeles to get examined and make determinations on whether he’ll choose to have surgery or not. Either way, expect Hart to miss around a month — if not longer. His season may very well be over.

Losing Hart matters a great deal and the team will need to compensate somehow. Lonzo Ball is expected to take Hart’s spot in the starting lineup — a change that was likely coming soon regardless, but one that is now here irrespective of whether Walton wanted to see more of Lonzo coming off the bench. Lonzo remains on a minutes restriction, but speculation has that number at around 30 minutes, which is fairly close to what the rookie averages on the year anyway. In other words, it’s only a matter of time before he has no restrictions at all.

Lonzo returning as a starter while simultaneously losing Hart will create some lineup trickiness that Luke Walton will have to work through. Who will play back up SG? How will Ingram and Lonzo manage offensive initiation duties with both starting? Will Isaiah Thomas see more time? Will KCP? Will Kuzma play some SF? Will we hear Luol Deng’s music??!! Okay, that last one isn’t likely, but with Corey Brewer now gone via a contract buyout, nothing is truly out of the question.

As for specific details about tonight’s game in Miami vs. the Heat, I’ve got little to really stress here — at least in terms of individual matchups.

The Heat are a playoff team and have been injected with some life after reacquiring Dwyane Wade at the trade deadline. The Cavs gave Wade the choice of staying in Cleveland with a reduced role or going back “home” to the Heat and I’m guessing Wade looked at the snow on the ground while imagining a nice glass of white wine by his pool with a view of some palm trees and called himself an Uber to get to the airport himself.

The Heat are not slouches, either, which makes the decision a bit easier. Miami is currently 32-29 and sitting in the 8th seed (and only a game out of the 7th seed). They are a balanced team that has several players scoring between 11 and 14 points a night, but are driven by Goran Dragic who made the All-Star game (albeit as an injury replacement) with a tidy line of 17, 5, and 4.

The Lakers, then, will need to be on their game tonight. In a way, they’ll be playing a version of themselves. Miami can come at you in waves, they play hard, and on any given night one of their key rotation players can step up and carry them for stretches. This is not a game where you can easily key in on one or two players with the hope that if you slow them you win. Yes, Dragic is the head of the snake, but Hassan Whiteside or Josh Richardson or James Johnson or Wayne Ellington or Tyler Johnson can all hurt you in specific ways. You cannot sleep on these guys.

This will require an attention to detail and level of engagement the Lakers have not necessarily needed in recent games. In the team’s last three wins they’ve faced the Mavs, Kings, and Hawks. These teams are tanking and, for the most part, were more than happy to fold down the stretch. Miami will do no such thing. The Lakers will need to play hard and smart for 48 minutes to come out on top. Being in Miami for two days, much like a road team spending a couple of nights in Los Angeles, can play a part in how engaged they’ll be, but the Lakers will need to fight through that.

Where you can watch: 4:30pm start time on Spectrum Sportsnet.