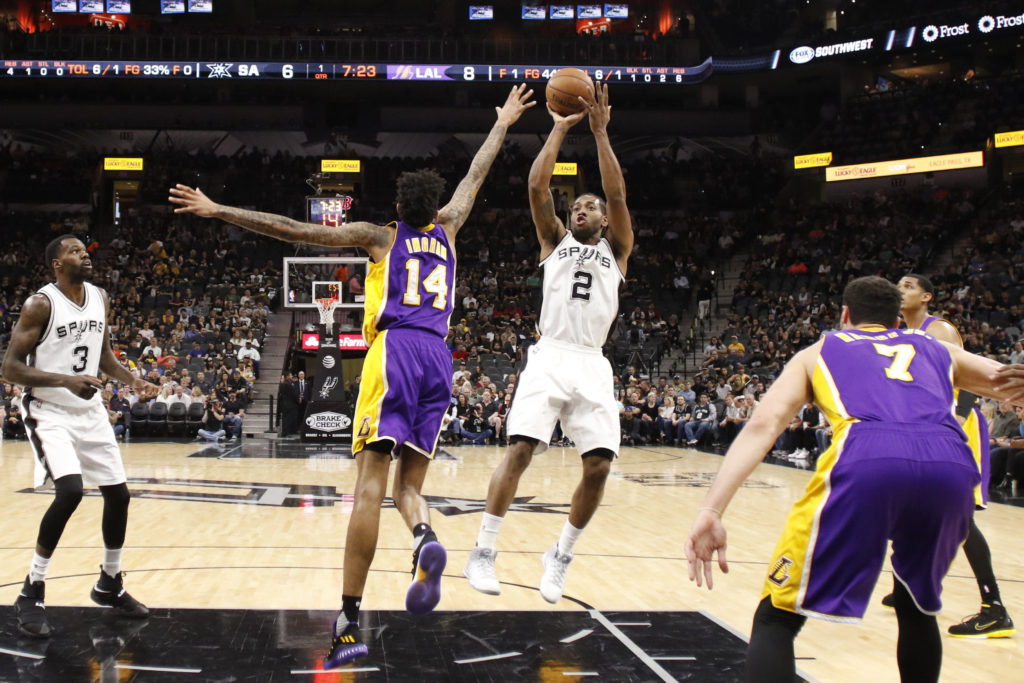 As reports of the Lakers engaging the Spurs in trade talks to acquire Kawhi Leonard broke on Wednesday, the discussion instantly became one of how those discussions would play out and, more specifically, who had the leverage in the talks.

When it comes right down to it, leverage is the crux of every deal that involves a superstar and the team, be it the incumbent or the new suitor, who maximizes that leverage the best will end up *winning the trade. (*This is a relative term. Most teams who trade away the best player lose the trade. But the goal is to always make the best deal possible when dealing the best player and the way you do that is to maximize your leverage.)

Do the Spurs have leverage right now? Yes. They understand the Lakers really want Leonard and Leonard is under contract. You want the player? Meet our price. This should be the Spurs line of thinking and by all accounts, it is.

The Spurs understand that their relationship with Kawhi is likely irreparable. Whatever nice quotes they float to the media about wanting him long term are grasps at more leverage.

But they know he cannot come to camp with the relationship the way it is and I think they know the likelihood of the relationship being altered significantly in a positive direction is low. They also know he just sat out an entire season and cannot risk a repeat of that this season.

The closer they get to training camp, much less into the start of the season, their leverage decreases. And they surely know they CANNOT go into the February trade deadline with him on the roster. A deal at that point will be trash for them. The breaking point for when a trade needs to happen is likely around the same time Kyrie was traded last year.

The conclusion they will come to: they have to deal him. And, reportedly, that’s where they are now.

The Lakers have leverage in this market, but it’s restricted by three things: time + available cap space + the wildcard of another team’s offer.

Time: If they insist on trying to make a deal happen quickly, before free agency begins, their leverage lessens and their offers will need to reflect that. It’s why the idea of “monster offers” are even talked about in the press as a real possibility right now.

Cap Space: And once they spend into the 2019 cap to the point that they no longer have a max space open for Leonard to sign there, their leverage goes down too. The threat for Kawhi to sign there is strongest when the Lakers actually have the space to do it, without any assistance.

Yes, they could still dump salary next summer if they need to. Or there’s always a sign and trade option. But bringing those things into the equation weaken the Lakers position based on the uncertainty of who they’ll be dealing with, what they incumbent team will want to accomplish in a deal with the Lakers, and any other number of factors that can complicate a deal.

Another Team’s Offer: Adrian Wojnarowski tweeted Thursday morning that the Spurs are engaged with several teams in trade talks – including the Celtics. Boston is a boogieman in every trade scenario for a top talent because they have a trove of young players and future draft picks they can throw into any deal. They also have Kyrie Irving who, depending on who you ask, may not be long for the Celtics roster since he is a free agent next summer and the team showed out well in the playoffs without him.

Whether Danny Ainge, known for playing hardball in trades and not wanting to give up long term assets for short term reward, is truly willing to toss in, say, Jalen Brown or the future Kings or Grizzlies picks the team owns for (potentially) a single year of Leonard is unknown. But the Spurs would be wise to play to the C’s interest and try to use it as leverage against the Lakers to get them to up their offers – especially in this early window of negotiations when, as said above, their leverage is highest.

So, what is the answer?

It seems the Lakers are going to have to accept they are unlikely to get into a position where they hold the leverage in a Leonard trade. There are scenarios where they can have their cake and eat it too, but those are not likely at all.

I mean, if the team got a commitment from LeBron only and were then able to retain the requisite cap space to sign Kawhi outright into next summer into, say, August? That would probably be enough to swing the pendulum back in their direction. If that also involved Julius Randle accepting his qualifying offer this year (which further maintains future cap space while also having Bird Rights on Randle for contract purposes next year) that is even better. If they can then find a taker for Deng at some point this summer for only draft picks, they’ve done all the requisite work to have a boatload of cap space next year to entice Leonard.

Barring a scenario that plays out this way (or similarly), I don’t know how they pressure the Spurs into a favorable deal at all, and surely not on a timeline which lines up for what we know the Lakers really want: for Leonard to be the first domino which triggers the rest of their free agency pursuits.

The Spurs know this. And, while they can, they will utilize this leverage for all its worth. But, if things get too far along it can all crumble for them. They know this too. So, it looks like the Lakers and Spurs are in a race against the clock. If the Lakers blink first, they will almost surely end up paying for it – literally with a deal giving up more than they likely want to.

Like they always say, the most important power a buyer has in a negotiation is the ability to walk away. Will the Lakers use that power? If they do, they might just get the leverage they want. But that could also cost them the player they seek.

Thank goodness I’m not the GM. This is too much stress and I’m only writing about it.