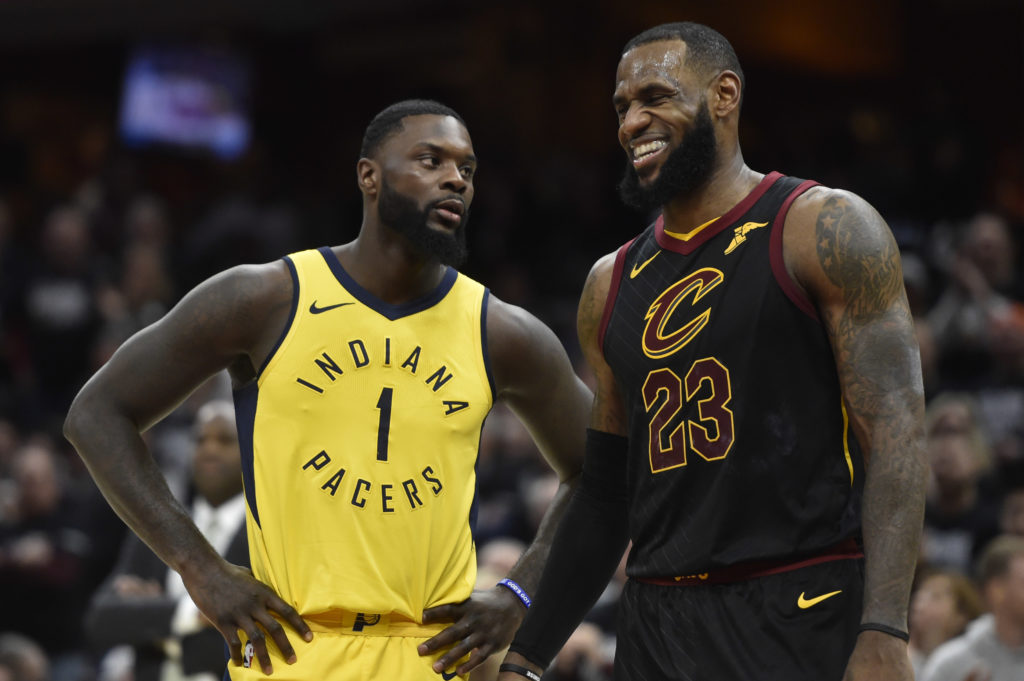 It’s that last signing of Lance Stephenson, however, that has a little bit of a twist to it. A twist that sort of matters. If you recall, when Stephenson’s signing was originally reported, the deal was going to be for 1-year at the room-Mid Level Exception of roughly $4.4 million. The contract Lance signed Tuesday is for that amount and for that length of time, but the room-MLE wasn’t the mechanism used.

No, the team used cap space to sign Lance. That move, combined with using cap space to sign Svi — he reportedly inked a 3-year deal for $4.6 million total* — means the Lakers are now out of cap space. From ESPN’s Bobby Marks:

No big deal, right? For fans of me and Pete’s podcast…well, yes and no.

It’s true, the Lakers still have $4.5 million to spend on a free agent using the room-MLE, just like they would have had if they’d used the salary cap exception on Lance and had the remaining cap space left over. The thing is, though, is that the room-MLE can only be used on a FA while actual cap space can be used in a variety of ways.

For example, as Reed pointed out in his detailed and information filled post on how the Lakers can acquire more star players, saving that last piece of cap space would have allowed the Lakers to facilitate trades where the salaries do not need to match in the same ways they do when a team is at or over the salary cap. Said another way, the Lakers could have taken a fair amount of more money on via trade than they sent out. You know, like maybe trading one or more of their young players who are on cheaper contracts for a higher priced veteran who just happens to play in San Antonio.

Beyond that specific example, the Lakers also could have also taken on a smaller contract entirely via a trade without having to send any player back out at all. This may not mean anything in July when teams are still in spending mode themselves, but it certainly could mean something in December or right before the trade deadline — especially if dealing with a team that is right up against the Luxury tax line and wants to duck under**.

Cap space offers versatility. A cap exception is a one trick pony.

The Lakers chose the pony when they didn’t have to. And while this likely won’t mean a thing and can be seen as just me pointing out a minor technicality which probably wouldn’t have come into play, it could have. And I’ll take the opportunity to remain more flexible even if I’m not going to use that flexibility over the limitations of choosing the alternative. Every time.

With everyone now signed, we run into another potential issue. The Lakers roster now stands at 14 players. With only one roster spot available, the Lakers only really have two options at their disposal:

There’s arguments on both sides of this, so I won’t push hard for either.

Keeping your options open and not signing anyone now allows for the team to remain nimble in case there are any unforseen issues that arise or in case there is an opportunity to make a trade where you bring more players than you deal out (2-for-1, 3-for-2). Maybe there’s a buyout candidate which surfaces in the future or a free agent remains unsigned into the season or your coach gets a better idea about where team needs might be as you get into the season. Or maybe there’s an injury and you need someone before the market for 10-day contracts comes up.

On the other end, as free agency slows, there is real value to be had. Want a shooter? Wayne Ellington is still there. Want to take a chance on a young big man? Alex Len could be your guy. Then there’s still guys like Channing Frye, Tarik Black, or Noah Vonleh who will all likely come cheap and could be end of the bench guys who could grab some minutes in a pinch.

The thing is, though, if you sign any of these guys; if you sign any player, period, you are at your full 15 man roster. Which, unless that player is signed to a non-guaranteed deal, would need to be waived, at a cost, to free up that roster spot again should you need it for another reason.

This is where bringing Bonga over now and signing him to a contract, when many presumed he would be a draft and stash, puts the Lakers in a bit of a roster pinch. I can certainly understand why they’d want to influence Bonga’s development as early as possible. He’s as malleable as he’s going to be at this stage of his career and why not try to mold him into the player you want him to become now, utilizing your own coaches, strength and conditioning program, nutritionists, etc, etc.

That said, Bonga isn’t going to play a lick for the Lakers next season. He’ll likely spend the entire year in the G-League — which is great for him, but maybe not the best utilization of a roster spot on a team with LeBron James.

Is this the biggest issue? No. And neither are the other items I’ve laid out above. But when taking all of them together, I’d say these final roster spots and piece of cap management haven’t been handled exactly the way you’d expect from a team looking to maximize all its options.

That said, if that’s the biggest critique — and when the free agent signings are fully deconstructed, I think it is — you’re doing alright. And when you remember that the Lakers got LeBron James, they’re doing better than alright.

*To sign Svi to a 3-year deal as a 2nd round pick, the Lakers had to use cap space.

**The Lakers could not have signed Lance Stephenson to the deal they did and maintained cap space at the same time. It’s an “ordering” issue of executing their signings. The point of an “exception” is to be able to go over the cap by using it. Without another signing to bring the Lakers up to the cap first, there would be no point in using the exception on Lance. That said, the point about using cap space to facilitate a trade before signing Lance still stands. That taking place in December or near the trade deadline as I wrote above, is not possible with Lance on the contract he and Lakers agreed to.