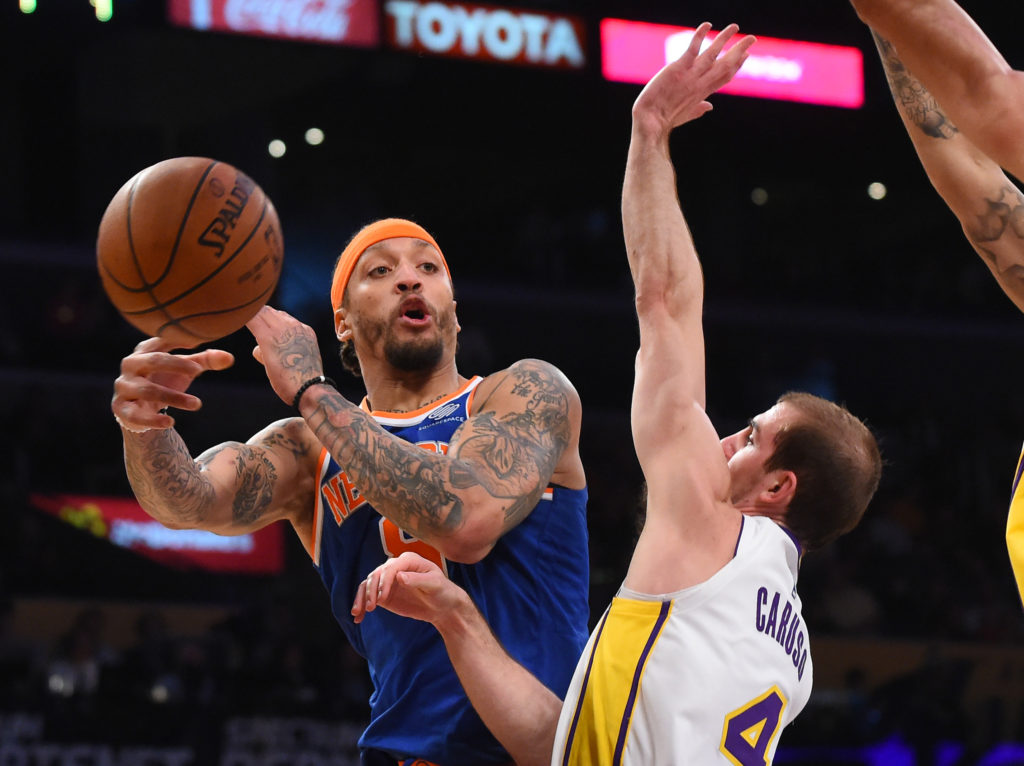 You thought the Lakers were done chasing free agents? You thought reports of Carmelo Anthony having heart eyes for Houston was going to stop the Lakers from still making their own splash? You thought this current Lakers roster with LeBron(!!!), Rondo, Lance Stephenson, and JaVale McGee couldn’t get any more weird?

Look. I have nothing against Beasley. He’s a super talented offensive player who, last year for the Knicks, in his 10th NBA season, averaged 13.2 points and 5.6 rebounds a game in a shade over 22 minutes a night. He shot 52% on two pointers, 39.5% on 3’s (though, on only 1.2 attempts a game), and boasted his 4th highest True Shooting percentage of his career (.556).

Basically, he fully embraced the role as a go-to scorer off the bench and seemed to settle in to his own skin, sorting through what could once be viewed as lost promise and instead found his niche on a team that worked for him. He seemed happy and that was good enough for everyone.

All of that considered, then, I am interested in seeing how things play out on this specific Lakers team. While the Lakers are not stacked at Beasley’s spot, they do already have Kyle Kuzma slotted for this exact role and could turn to Brandon Ingram or, you know, LeBron to play this spot as well. Beasley should clearly be behind all of them in the rotation and when you’re 4th in line, consistency in minutes or finding a permanent foothold in the rotation can be difficult.

Beasley is not a bad guy by any means, but I’m interested in seeing how he responds if he goes games without playing big minutes — or games without seeing the floor at all. I’m not saying this is likely, but he’s on a one-year deal while the guys in front of him are (or should be) viewed as foundational pieces for the future. The likelihood of the pecking order being as I laid out above is real and if Beasley doesn’t find a consistent role, I wonder how happy he’ll be.

This, then, puts an even bigger emphasis on leadership from both Luke Walton and LeBron James. Both will need to manage the locker room dynamics which come from a roster full of viable NBA players who will want to see real minutes, but likely won’t. At least not all of them and surely not consistently.

If there’s one saving grace here it’s that Luke loves to play deep rotations of 10-11 guys and this team should give him that opportunity. Still, though, finding the right combinations and sorting through all that will take time and experimentation — something that can, and likely will, lead to some early season hiccups.

What is undeniable, though, is that the Lakers have added another NBA level talent to a rotation already deep with them. A current examination of their depth chart (not including 2-way contracts) looks like this:

That’s a lot of guys who can play. Which only further fosters and environment of competition that Walton and the front office want as a staple of this organization’s culture. So, through that lens, and when looking at simply wanting more scoring pop and overall talent, you can see what the front office is thinking in snatching up Beasley at a cost that is reasonable.

On the other hand, though, striking the right balance of personality and talent + how that all relates to available minutes and roster construction is also important. And the Beasley addition could seemingly push that balance a bit in the direction of where at the very least it requires more monitoring and effort to make it go smoothly, if not outright so far where you question if it’s the right thing to do in the first place.