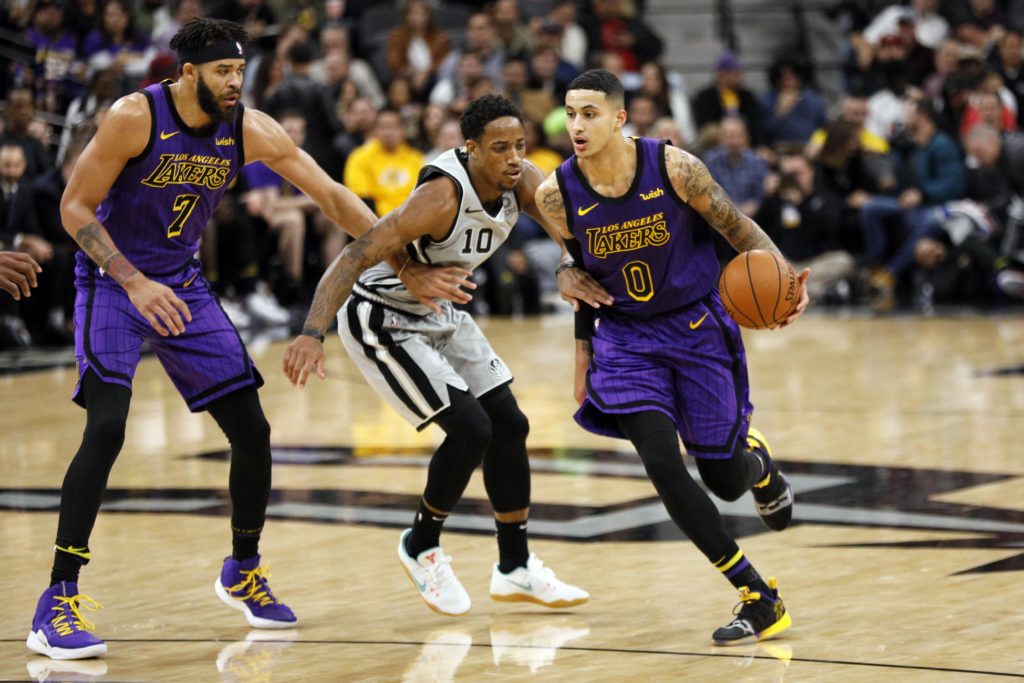 It’s the day after Thanksgiving. Black Friday! Time to go shopping. So much to choose from.

Know what I’m not buying? Kyle Kuzma stock, that’s what.

On this night, in a win over the Utah Jazz, Kuzma looks like the player he has for too many nights in the infant stages of this NBA season. His line: 9 points, 4-12 shooting, 1-5 from behind the arc, 6 rebounds, no assists, and a turnover. Bleh.

This gets us to the end of November and despite a few intriguing games I’m wondering what’s wrong with Kyle Kuzma.

Don’t get me wrong, to that point in the season, Kuzma’s numbers were respectable. He was scoring a shade under 17 points a night while grabbing a handful of rebounds. He’d shown good chemistry with LeBron and had become a dynamic transition threat who was finishing much better around the rim than last season. But what made him a tantalizing prospect and an All-Rookie 1st Team performer a season ago was not being built on in any meaningful way.

His three point shooting evaporated to sub-30% levels on high volume. His isolation work was clunky and turnover heavy, with offensive fouls and shaky ball-handling his main undoing. Defensively and on the backboards, he left a lot to be desired — he was getting bullied by bigger players and worked over when switching onto point guards. In a game against the Kings, D’Aaron Fox used the zero in the middle of Kuzma’s jersey as a literal bullseye, relentlessly hunting him out in the P&R and then using his quickness and stop-start game to get to whatever spot he wanted.

It was to the point that I — and I’m sure I was not alone — was ready to move Kuzma to the bench in favor of Josh Hart, whose more reliable shooting and defensive fight (even if it came with mixed results) would blend better with what the starting group needed.

A funny thing happened on my way to turning Kyle Kuzma into a 6’10” Jordan Clarkson, though. Comments from teammates and coaches were shifting and flipping the narrative surrounding his recent play. Kuzma was doing more than just scoring, I heard. He was rebounding more (check’s the boxscores for the Pacers and Mavs game — it’s true!) and making better reads as a passer (goes back and watches clips from the Magic, Mavs, and Nuggets games — again, they’re right!). He was defending more on the wings and holding his own, not only in isolation but in chasing around off-ball screens and when navigating P&R’s.

Was Kuz turning the corner?

It’s now December and in the 5 games this month Kuzma has been the best version of himself. 25 points a night to go along with 8 rebounds and nearly 3 and a half assists. An assist to turnover ratio of 2:1 and more heady play all around. He’s hitting 38.5% of his 3’s on nearly 8(!) attempts a night and carving out space around the rim in the Lakers halfcourt sets by moving well off picks to curl towards the paint, smartly ducking in from the weakside when the defense loses connectivity, and bullying smaller defenders when teams switch or try to guard him with a pure wing. He’s even dabbling in running some P&R, attacking downhill vs. drop coverage or moving the ball onto an open teammate if defenses press up higher and take away his angle.

Defensively he’s more aware and optimizing his physical tools better. He’s walling off smaller players by playing angles and using his size and length better to contest shots. He’s hitting the glass harder by crashing in from the perimeter and then pushing the ball himself to leverage his own strengths as an open court player and his team’s strengths as one of the best transition groups in the league.

Kuzma has gotten back to his roots as a all-court PF and gotten away from solely being a 6’10” pure wing. The process and results venn diagram are aligned fully. This is who Kuzma can be when he takes the best parts from his full skill set and applies them based on specific foes. It’s led to even more confidence which then tumbles into more inspired play which knocks into better results. He is the personification of getting on a roll.

What happens next is interesting, though. Brandon Ingram will return from injury soon. Ingram does not threaten Kuzma’s starting spot, but he does bring with him a playing style much different than the spot-up shooting/attacking closeouts/transition heavy repertoire of Josh Hart. Hart is a plug and play guy, a role player who fills in the gaps. Ingram is being groomed to be much more than that and that grooming necessitates touches and compromise from those who surround him. This is what playing the long game looks like and if you don’t want to play the long game, don’t draft the youngest player in his draft class #2 overall.

So, the Lakers have a bit of a decision to make. The best version of this current team has LeBron James being LeBron James and optimized versions of Ingram and Kuzma flanking him. We know what an optimized version of Kuzma is — we’re watching him now. The optimized version of Ingram has made cameo appearances this season, but getting him there consistently is harder than it is for Kuz when playing next to LeBron — Ingram is a work in progress. As a long-term believer in Ingram, and in my best Marlo Stanfield voice, I might say this is what you call one of those good problems. After all, I want more talent, not less. If I have to tinker and tweak things to get it to all work, well, I’ll tinker and tweak.

But I must say, regardless of how this plays out, the Lakers cannot simply prioritize Ingram at the expense of Kuzma. Not now; not when his game is starting to bear the fruit of his off-season work. Kuzma deserves his chance to prove this current stretch isn’t just a hot streak and that the strides he’s showing as a passer, rebounder, and defender have some staying power. Because this is the Kyle Kuzma we’ve been waiting for. And if Ingram can soon join him, the Lakers will have another leap in them.