So, the Lakers traded D’Angelo Russell for Brook Lopez and a late 1st round pick in Thursday’s NBA Draft. Typing that still feels weird. Probably because I don’t really like this deal, even if I understand it is likely a precursor to future moves (or, at least, it needs to be). In order to try […]

Okay…so this just happened. Lakers are trading Tim Mozgov and D'Angelo Russell to Nets for Brook Lopez and 27th pick Thursday, sources say. — Adrian Wojnarowski (@WojVerticalNBA) June 20, 2017 As I pick my jaw up off the ground, here are a few scattered thoughts that probably won’t do the gravity of what just happened justice. […]

You will not find a more divisive member of the Lakers today than D’Angelo Russell. Opinions of him run the spectrum of hot takes, with full throated endorsements and dissents colliding each day wherever you are. There’s not a single player who inspires as much debate, no, belief that they’ve pegged him not just for […]

In our latest episode of the Laker Film Room Podcast, Pete and I discuss D’Angelo Russell’s wild week which started with him playing poorly, then moved to the bench, then culminated with his return to the first five and a career high 40 point night. We also touched on Luke Walton’s schemes, Brandon Ingram’s good […]

D’Angelo Russell returned to the starting lineup in Sunday’s matchup vs. the Cavs and he brought an offensive explosion with him. Russell shot the lights out, scoring a career high 40 points while dueling with Kyrie Irving the entire night. It was quite the sight to watch Russell score almost at will and from all […]

There’s not a single player on the Lakers’ roster who receives as much backlash from fans as D’Angelo Russell. Often viewed through a deficit model, there is a vocal group of detractors who like to point out all he does not do and/or all he does do, but not well enough. It’s a fascinating (and […] 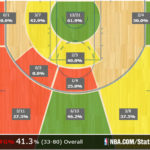 It was the Lakers’ first game after a nice Christmas win and D’Angelo Russell really wasn’t shooting the ball that great. The opponent was the Jazz and Russell closed the game with only 4 points on 2-11 shooting. Fans were in my twitter mentions telling me I was being overly praiseful of the Lakers’ 2nd […]

The walking wounded Lakers may have reinforcements coming. Both D’Angelo Russell (at least 2 weeks) and Nick Young (2-4 weeks) are in the window of time in which they may be ready to return and it looks like it will happen for both sooner than later: Luke Walton says D'Angelo Russell practiced today and there […]