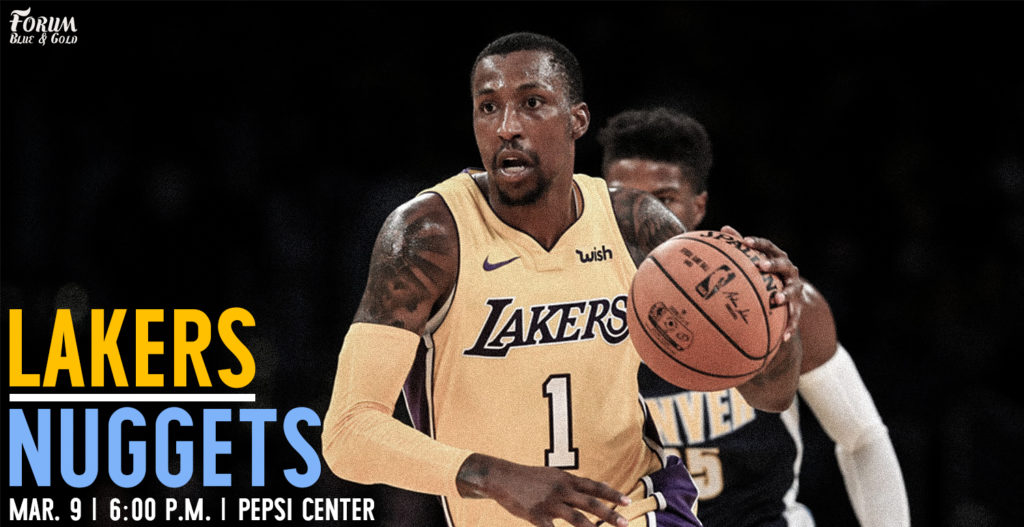 The Lakers got back to their winning ways on Wednesday, finding a way to beat the Magic at Staples Center. The game itself was a cycle of frustration and exhilaration, repeating itself over the course of 48 minutes, until the the referees made a mistake with the clock with 0.6 seconds left — which they then compounded with a misinterpretation of a rule — that ended the Magic’s chance at stealing a win.

If that game left you unsatisfied, I don’t blame you. The Magic are bad and, well, kind of tanking. And even though the Lakers are shorthanded and seeking out solutions on the wing, the hope would have been that they’d take control of the game and ride that out to win. Hopes don’t always translate to action, though, and we got what we got. At least it was a W. So I’ll take it.

Building on that, then, the Lakers are back in action to face the Nuggets. Denver is decidedly not tanking, instead trying to push for the playoffs in a Western Conference that has 10 viable candidates for only 8 spots. Denver has been on the inside of that 8 team bracket for most of the year, but now find themselves on the outside looking in, tied for 9th with the Jazz and only a half game behind the Clippers.

These games matter for them, then, and I expect a strong effort from them even if they’re a hard bunch to read.

The Nuggets have recently gotten Paul Millsap back (remember, he injured his wrist earlier in the year vs. the Lakers; he’s just gotten healthy from that), still have budding star big man Nikola Jokic, a young backcourt tandem in Jamal Murray and Gary Harris that everyone loves, and several other young and/or good players who help you win.

With this assortment of talent, and Millsap back, you’d think the Nuggets would be primed for a run that would get them into the postseason. Instead they’ve lost two in a row and four of their last six, including a really bad loss to the Mavs and a critical one to the Clippers (who used that W to leapfrog them in the standings). So, while I think the Nuggets should win a game with these stakes for them while facing a banged up Lakers team…your guess is as good as mine as to whether they should up and do so.

From the Lakers end, the best to hope for is them continuing to compete and leveraging their remaining, healthy talent to stay in games. That means physicality and aggressiveness from Julius Randle. Shot making and strong post work from Brook Lopez. Shot making and good shot selection from both Isaiah Thomas and Kyle Kuzma. And general all around brilliance from Lonzo Ball. Add to all this defensive intensity and attentiveness, too.

These things are all possible, of course, but getting them all in the same game while playing on the road might be a tough task. If it happens, though, we might end up walking away from this game wondering what the hell is wrong with the Nuggets that they couldn’t beat this banged up version of the Lakers.

Where you can watch: 6:00pm start time on Spectrum Sportsnet.