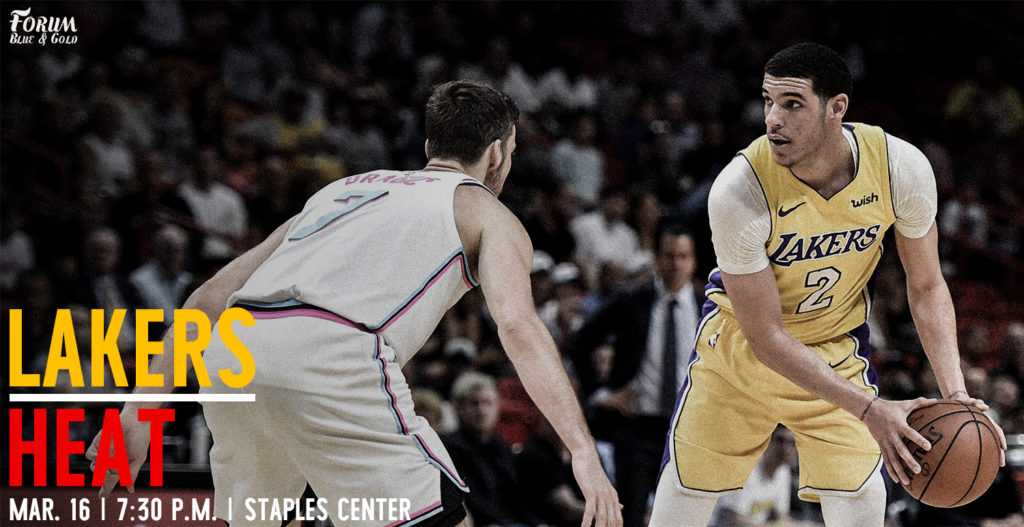 It’s March and the Lakers are playing a relevant game against Miami tonight. The Denver Nuggets recently experienced what is like to play an engaged Laker squad at the end of the season. That’s right, it’s Spoiler Season.

The Heat are coming off a 119-123 loss to the Sacremento Kings on Wednesday despite the Kings playing De’Aaron Fox meaningful minutes. At this stage, the Heat are battling the injury report as much as they are fighting to improve their playoff seeding.

Hassan Whiteside is out for the game tonight along with Dwyane Wade. Josh Richardson remains doubtful which pushes the Heat into Laker territory of lost players. For their part the Lakers will be missing Brandon Ingram, Josh Hart, and Channing Frye – a player that was allegedly traded to the Lakers though he remains something of a Lockness Monster on the roster.

When these teams played March 1st Isaiah Thomas came up big with 29 points, 4 rebounds and 6 assists. He will need a similar game as the Lakers will have to replace the scoring for Ingram and Kyle Kuzma (questionable with an ankle injury).

The key to tonight will be how well the Lakers can contain Heat point guard Goran Dragic. He was good for 33 points in the loss to the Kings on Wednesday. If the Heat are going to steal this game it is going to be behind a monster performance from Dragic.

The Lakers are 12 and 3 at home since the start of the year and have settled in with the 12th ranked Defense in the league (104.2). Against all odds they have also raised their offensive game to a respectable 21st rank (104.2). All that to say this team is a legitimately good professional basketball team.

The Heat have had a night off in Los Angeles at the end of a road trip. That may or may not be relevant but there is that piece of information. It is important that we push the pace tonight, contain Dragic offensively, and physically play the rookie center Bam Adebayo. Though the Lakers are shorthanded they still have budding super hero Julius Randle.

In March Randle is averaging 23.8/10/3.4 at home. With our team short-handed and Julius playing for a contract you can expect him to bring that same intensity tonight. Brook Lopez has also had a resurgence the last two weeks. Look for Lopez to take advantage of the Heat’s young center.

The Lakers are on a march for .500 basketball and we should expect a win tonight against a Heat team that needs to stay healthy more than they need to win a game. Enjoy the game tonight boys and girls. It has been a brutal three years, if you get a little obnoxious on Twitter about it tonight the league will understand. Or they wont. Either way you be you.

Where you can watch: 7:30pm start time on Spectrum Sportsnet