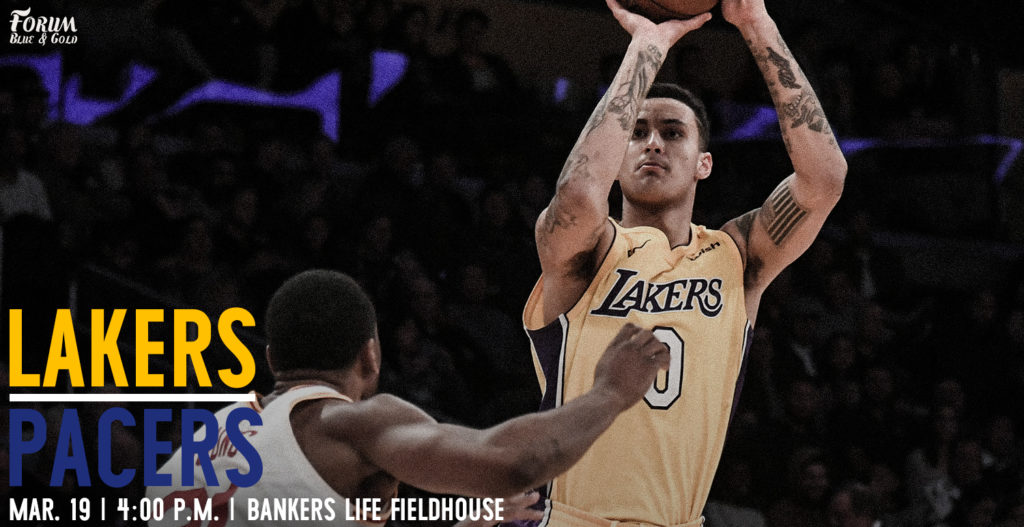 The Lakers continue to play well enough to be in games (well, most games), but are suffering from injury induced depth issues and some rough shooting struggles from Lonzo Ball to win consistently. They’ve now lost two straight games and begin a 4 game road trip today in Indianapolis to face the surprising Pacers. And they’ll do so without Brandon Ingram for at least this game and maybe more…

In other words, if you were hoping the Lakers bounce back it’s going to be tough sledding. The Pacers are currently tied for the 4th seed in the East and only a half game behind the Cavs for 3rd. And while the Lakers want to play spoiler (and fight for their own lives to stave off playoff elimination – no matter how unlikely that may be), the Pacers want to move up to 3rd and be as well positioned as they can for the playoffs is likely an even strong incentive in this game.

Like the Heat and the Warriors before them, though, the Pacers are dealing with some injury issues. Domantas Sabonis is out. Myles Turner may not play either. Those two are key cogs in a versatile Pacers frontcourt that can both finish inside and stretch the floor some. If both are out, Indy will need to rely more on Thad Young and Al Jefferson while digging even deeper into their depth for stretches.

This matters against a Lakers team that is, right now, powered by their front line duo of Julius Randle and Brook Lopez. Both have been playing very well of late, getting points in bunches and defending admirably. Randle also remains a best on the backboards and his all-court game is proving difficult for defenders of all types to slow down. If Randle (especially) an Lopez can also draw fouls, it can be a great way to establish the terms of engagement tonight.

Still, though, the Lakers lack of wing depth is sure to be problematic this game. Victor Oladipo has been fantastic this year and Lance Stepheson is going to offer some dynamism (or at least some Lance Stephenson magic worth watching — good or bad). With Corey Joseph and Darren Collison and Bojan Bogdonavic also offering some perimeter punch, the Lakers will need strong games from Lonzo, Isaiah Thomas, KCP, and Kyle Kuzma to keep up. This is all possible, of course, but can the team also hold their own if Travis Wear sees minutes at SF? What about when Tyler Ennis gets minutes in the same backcourt as Thomas? Will the mounting minutes the aforementioned frontline players have to play start to add up?

These are the questions which, when answered in the negative, have led to losses in recent games. And it will need to turn around tonight if the Lakers are to get back to winning ways.

Where you can watch: 4:00pm start time on Spectrum Sportsnet.