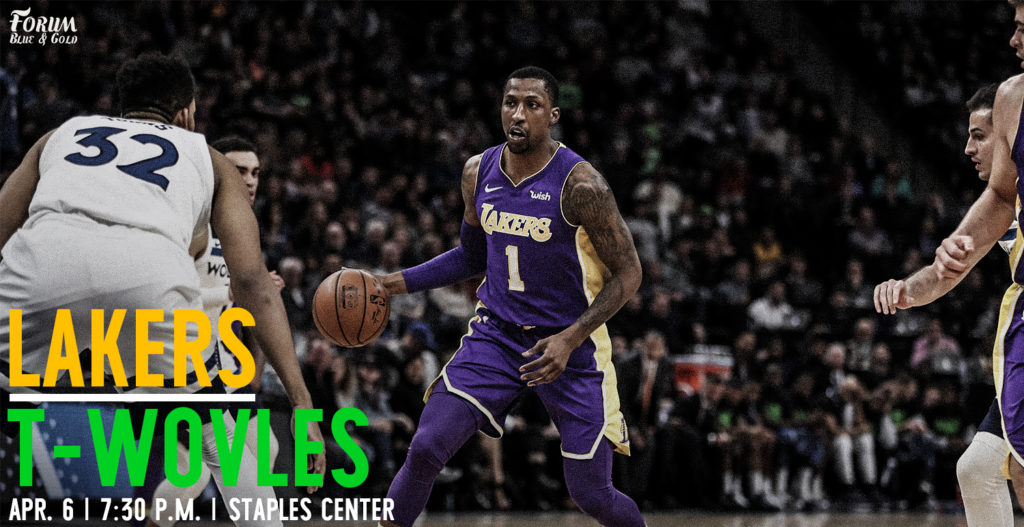 First off, sorry for the delay in getting this up. I’ve not been feeling well. That said, it’s game night and while this post was listed as questionable it will gut it out and make an appearance.

Speaking of health, the Lakers are again shorthanded for tonight’s game vs. the Timberwolves. I do not expect Brandon Ingram (concussion protocol) nor Lonzo Ball (knee) to suit up tonight. Down two key ball handlers and playmakers will be a problem, even if the team was able to manage it effectively enough to down the Spurs in one of more feel good wins of the year.

Much like that Spurs game, if the Lakers are to have a chance in this one it will take some hot shooting on the perimeter and balanced play from the front court. KCP and Kyle Kuzma will need to get hot, Josh Hart will need to knock down some shots, and the combo of Julius Randle, Brook Lopez, and Ivica Zubac will need to offer interior toughness, work on the glass, and scoring punch both inside and stretching out of the paint.

One might think a Tom Thibodeau team would be able to hold up defensively against this type of Lakers attack, but that is nowhere close to a sure thing. The Wolves are 25th in defensive rating on the year, while boasting a top 5 offense — or basically the inverse of what you’d expect from a team where Thibs is shouting out instructions in his raspy baritone from the sidelines. The Wolves have players with defensive profiles, but not in acumen or execution and it’s hurt them all year.

In other words, this game could become a shootout and if the Lakers wings get hot and Randle/Lopez are able to channel some of their scoring outbursts from a week or two ago, this one could go down to the wire. Though, considering how badly the Wolves need this game, that would be a truly terrible development for them.

Currently 8th in the West and tied in the loss column with the Nuggets, this is a game the Wolves need severely. Every game is paramount for them, though with 2 head-to-head matchups with Denver remaining, they could control their own destiny regardless. Still, though, a loss to the Lakers — a team both banged up and well below them in the standings — would be a bad one, even if the game is in Los Angeles.

As I’ve written before, though, the Lakers should relish their role as spoiler in these last few games.After putting the Nuggets playoff chances on life support a couple of weeks ago, the Lakers can all at once bring them back into the fold while putting the Wolves in the same situation they did Denver.

As our buddy Sten Ensberg told me offline, “I for one think it’s awesome that we play three teams trying to make the playoffs and we have no reason to tank. Not a bad way to end.”