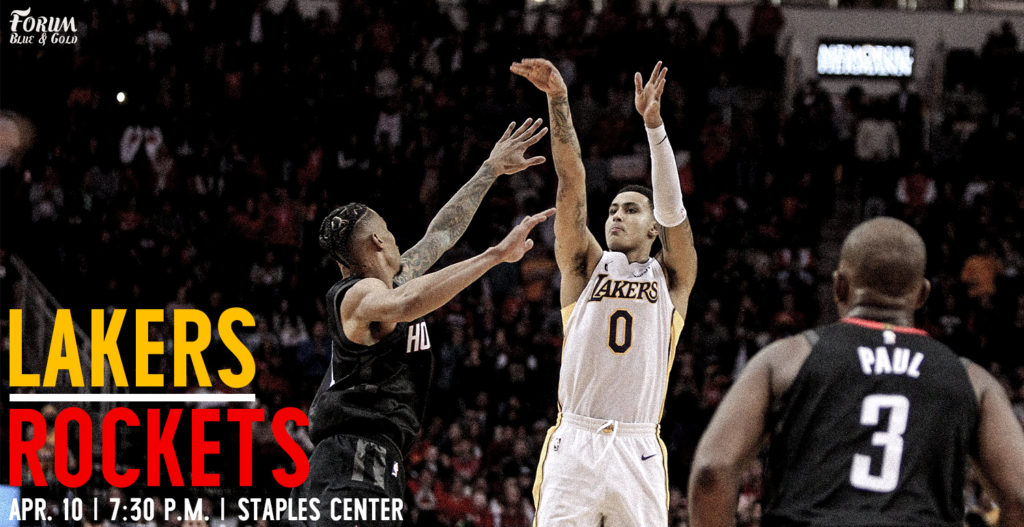 The team has had it’s ups and downs, dealt with more injuries than anyone would have liked, but has set a foundation for its future. It’s been an important year, but one that leaves us — I’d argue — both wanting more and optimistic of the future. We’ll get into all of this more later, but now that the end is literally right around the corner, it’s hard not to reflect a little bit.

Tonight’s opponent is the Rockets — the league’s “best” team. I have that in quotations because such titles are not verified until, you know, June, but with the NBA’s best regular season record, the best betting odds to win the championship, and the likely MVP winner in James Harden, this team has the credentials to assert this claim in early April.

Heading into tonight, then, one has to wonder how much this game matters. Houston, in theory, could sit their best players or at the very least limit their minutes severely. They have this luxury no one would blame them if this is the tack they took. The Lakers, meanwhile, remain banged up and will be missing three of their best players who also double as their best young perimeter options.

Lonzo Ball and Kyle Kuzma are officially out for tonight. Brandon Ingram is on the court shooting. He’ll be re-evaluated tonight and is in the finals stage of the concussion protocol, but he’s still out for tonight.

This game, then, offers little to no stakes. No playoff seeding. No draft pick considerations. Nothing. There’s nothing to really learn at this stage and…that’s okay. Getting back to the top of this post, the season is basically over and while a full dissection will come eventually, the results of that autopsy will be influenced exactly zero by this game.

So, enjoy this one for what it is. A feel good moment for long time D/G-League player Andre Ingram who finally got his call up and who will likely see his first NBA minutes ever tonight. Hopefully he bombs some threes and the crowd showers him with some love. Beyond that, though, no more injuries — for either team — and call this one a night.

We can’t wait to see you hit the court for the #LakeShow, Andre. pic.twitter.com/O6EeyT7Bbg