Kyle Kuzma is flashing a smile as he tells a story about DeMarcus Cousins threatening to clothesline him. The rookie forward is explaining his “welcome to the NBA moment” to the Inside the NBA crew after the Rockets lost game 2 to the Utah Jazz in Houston.

You see, Kuzma may not be in the playoffs, but there he is, on TV, in the first week of May, continuing his star rise to all who watch.

Kuzma’s story to the Inside crew — one where instead of him being humbled, like most of these types of stories are, is instead one of success. He detailed how he’d curled off a screen, drove to the rim, drew Cousins in help, then dished off an assist to Andrew Bogut for a dunk. Cousins told him it was a good play, then told him he’d get the taken out the next time. Some welcome.

Classic Kuzma and indicative of a rookie season that no one saw coming except for, I guess, him. A season where, as the 27th pick in the 1st round, he probably should have been a lightly used reserve just learning the league, but instead made his mark as one of the more promising young players in the NBA. Kuzma is almost assured a 1st Team All-Rookie team spot whenever the honors are announced. And it will be deserved.

Where Kuzma goes from here will be more than just interesting, it will be of utter import to these Lakers. As it stands now, at the end of a promising rookie campaign, Kuzma is found money. Players drafted where he was rarely become meaningful players beyond finding a key role as a supplementary guy on a good team. That’s not nothing, of course, and many pros would salivate at a 10 year career making something like the mid-level exception while playing into May (and maybe June).

But Kuzma can be more than that. That much is clear after the season he had — tying with Brandon Ingram and Julius Randle as the Lakers’ leading scorer (16.1 per game), breaking the team record for most made 3’s by a rookie (159), tallying 17 double-doubles (2nd among rookies to only Ben Simmons’ 38), while starting 37 games (out of 77 total appearances) at both forward positions.

Kuzma can be a star. He can also be the key to unlocking the type of lineup versatility which defines championship caliber rosters in this era of pace and space. 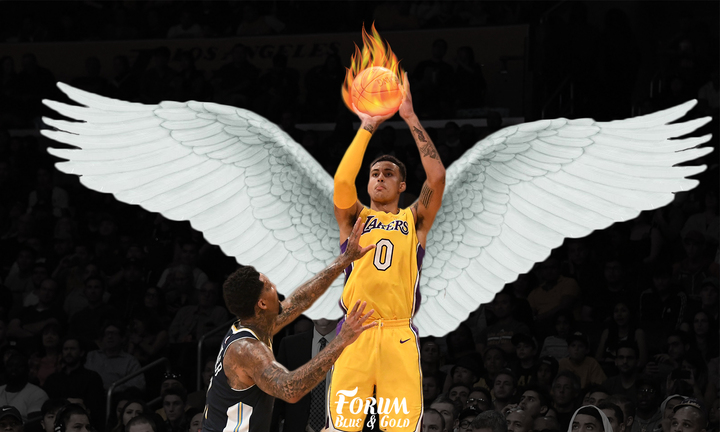 Kuzma offers a unique skill set and one which is tailor made for success in today’s NBA. His combination of shooting ability, quick release, and ability to attack a closeout give him the exact type of scoring versatility for the analytics era. Further, he has grab and go ability off the defensive glass, has a good enough handle to be an outlet option and work as an offensive initiator, and has shown some good feel as a passer (even if his primary instinct is to score the ball).

In the final stretch of the year, too, his use as a SF allowed him meaningful reps in game situations and play types which gave him a needed taste of what being a real NBA wing is like. He played as the ball handler in the P&R, used more aspects of his handle than what was required of him as a pure “attack closeouts” stretch PF, and had to navigate areas on the floor/actions defensively which PF’s typically do not have to unless they’ve executed a switch.

And he did all these things with enough acumen to show he deserves more time doing these things long term. Let that resonate for a minute.

A player who was almost exclusively a PF in the traditional mold at the college level came into the NBA as a rookie who not only showed he could shoot the 3-ball effectively and at a high volume, but could initiate action out of the P&R, flash real passing ability, and attack off the dribble while showing craft with spin moves, euro-steps, and wrong-footed takeoffs. His finishing package — running hooks, advanced footwork post moves, floaters, etc — was also way more refined than a player with his college tape and pedigree would have predicted.

Add this to the work he did in transition both as a leak-out option and lane filler as well as a guy who could operate in the middle of the break and Kuzma, at least offensively, showed off the type of all-court game that can move beyond complementary and into the realm of foundational.

One thing the playoffs are showing is how valuable players who cannot be schemed off the floor, regardless of matchups, have become. In a recent Lowe Post episode between Zach Lowe and Kevin Arnovitz, their conversation touched on both Clint Capela and Derrick Favors and how the former has become a player who can stay on the floor regardless of matchups (both individual and team), while the latter is someone who proved extremely useful in Utah’s matchup with OKC and lacking that same utility against Houston.

Kuzma, even with his current warts defensively and on the glass (which, one would hope is going to improve — especially his defense), is already showing he is someone with enough versatility to stay on the court regardless of matchups just because of his offense. He will take bigger, slower players to the perimeter to shoot outside or drive by closeouts; he can post up smaller players or at least put them in P&R’s to the point where they either need to switch or get them into back-line rotations.

Coming into this season I saw Kuzma as a “PF only” whose utility would likely be as a change of pace big who was clearly behind Randle and Nance in that positional pecking order. Now Nance is gone and Randle is showing his own versatility as both a bruising PF and a small-ball C who can hang defensively against almost any player/position type in the league.

So, not only can Kuzma get more minutes at PF, but he can also steal minutes on the wing or play in lineups next to Ingram AND Randle and, potentially, even another high usage wing and not have his game suffer at all on either side of the ball.

This is how good Kuzma can be. The question is, will he? Time will tell. But, if nothing else, I think we should trust he will put in the requisite time and work to give the Lakers a reason to invest in him (and the other young players) and give himself the best opportunity to vanquish those doubts just like he did the ones which led him to be drafted where he was in the first place.