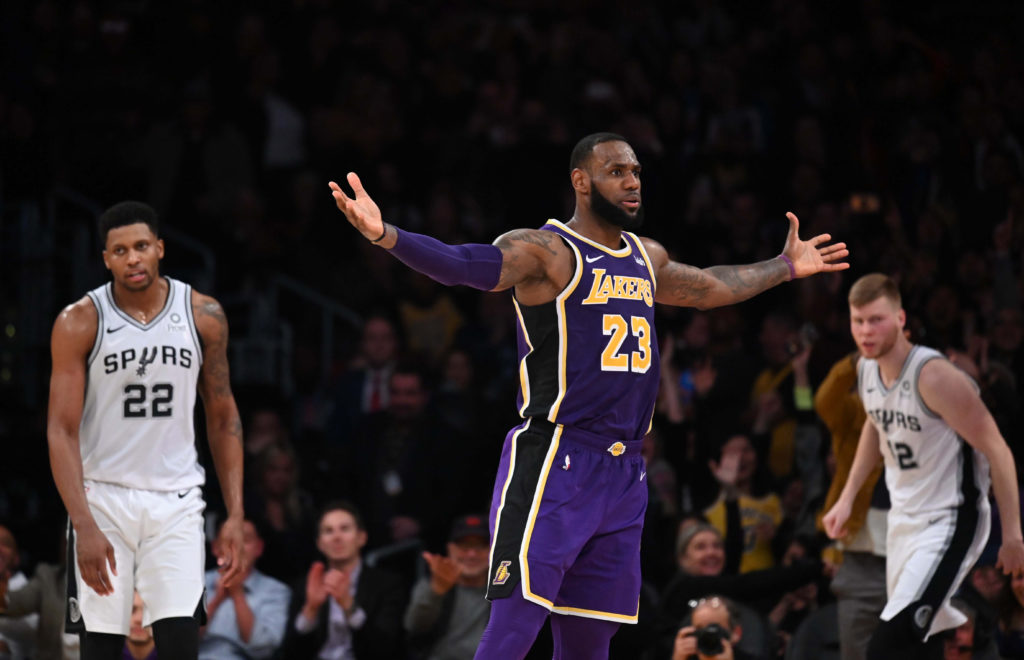 To say that January has been a rough stretch for the Los Angeles Lakers is saying just a little. Thursday marks the final day of the month and as ESPN’S Dave McMenamin notes, LeBron James will once again be watching from the sidelines (update: LBJ will play).

Six wins and 11 losses have occurred since James went down with a Christmas Day groin injury. An erratic zig-zag journey would take the team around the country and from fourth to ninth (and verging on 10th) in the West. All this punctuated by the blockbuster news that Anthony Davis wants out of New Orleans, followed immediately by speculation that all the Lakers would need to give up to win a trade sweepstakes would be the remainder of its once-vaunted youth brigade.

Imagine how mind-boggling weird it would be to see Lonzo Ball, Brandon Ingram, Kyle Kuzma, Josh Hart and Ivica Zubac reunited with Julius Randle, as Pierre the Pelican and King Cake Baby cavort in the background?

Nobody can argue the transcendent greatness of Davis. If you can land a 25-year-old like that and partner him with LBJ’s supernova, you do it, regardless of the cost. And then you cast about for a few warm bodies to fill the league minimum number of 13 players.

The Lakers’ way forward this season has been littered with unforeseen mishaps. James, Ingram, Rajon Rondo, and JaVale McGee have missed 69 games between them, Kuz has been out of action as of late and Ball won’t be back for another month (at least). Was there ever a point where everyone was healthy?

There have been highlights, nonetheless. The recent resurgence of Zubac has resulted in a legitimate 3-headed monster (with McGee and Tyson Chandler), evoking memories of a not-so-distant past in which giants routinely dominated the paint in the NBA. Ball was progressing before our eyes in all the ways—save for free throws—we had hoped for, before yet another untimely hiccup in the form of a severely sprained ankle.

And who can deny the Ballad of B-Easy and Born Ready—a couple of knuckleheaded yahoos who roamed the serpentine journeymen’s path before starting to fire on most of their cylinders in Los Angeles?

February could be the place where everything comes back together again, a regrouping of a squad that is once again hale and hearty, a team that has in its best moments been a fast break joy to behold, punctuated by lob passes, thunder dunks and swarming effort and enthusiasm.

It is a team that has successfully merged kids and gray-hairs, camaraderie and wisdom, promise and delivery. But the construction of successful modern-day NBA franchises has always been both Sisyphean and quicksilver, littered with coaches, executives and players along the way. The search is always on for elusive combinations of building blocks and luminaries, development and delivery, offense and defense, schemes and solutions, salary machinations and crystal balls—all of which can slip south in a second on a slick hardwood floor.

After the Lakers’ loss to the Philadelphia 76ers, players responded to the obvious elephant in the room—the Davis rumors—with standardized “it’s a business and we’re only focused on playing” word-speak. But the first quarter of that game showed a wariness and discombobulation that is inherently human and not dissimilar to any other workplace where employees wonder, whisper and wait for the other shoe to drop. Despite the distraction, it was also a career-high night for Ingram.

Building a team of kids is a quixotic quest for the middle of the pack while a roster with one megastar is a hero’s ride into a box canyon with snipers perched above. Two heavy hitters get you part of the way home and the ultimate jackpot is the Golden State Warriors with a roster so ridiculously loaded that the rest of the league can only pray for win-fatigue.

If Magic Johnson and Rob Pelinka can pull the trigger on a trade deadline deal for Davis, they will and rightly so. Because the heart-tugging loss of youth’s promise can be assuaged by an offseason pickup of another elite talent.

But the deadline could pass just as easily and the latest rumors could subside, waiting to be rekindled and reborn again in the lead-up to Free Agency, with Davis joining a potential murderer’s row of Kevin, Kawhi, Klay, Kyrie, and Kristaps.

And after the All-Star lull and as the final sprint to the playoffs begins, perhaps the Laker kids will find their collective groove again, and LeBron will electrify, Rondo will counsel, JaVale will swat and Lance will strum his air guitar. This is a team that roared through November with a 10-4 record, a team with a one-for-all exuberance and a penchant for playmaking that at least partially made up for its suspect three-point prowess.

So no worries: the odds are long, the battle uphill and the plan uncertain. This would be the place in the movie where everyone takes a breath, checks their ammo, adjusts their hats and steps out into blazing sunshine under a cobalt sky. Cue the Ennio Morricone soundtrack.