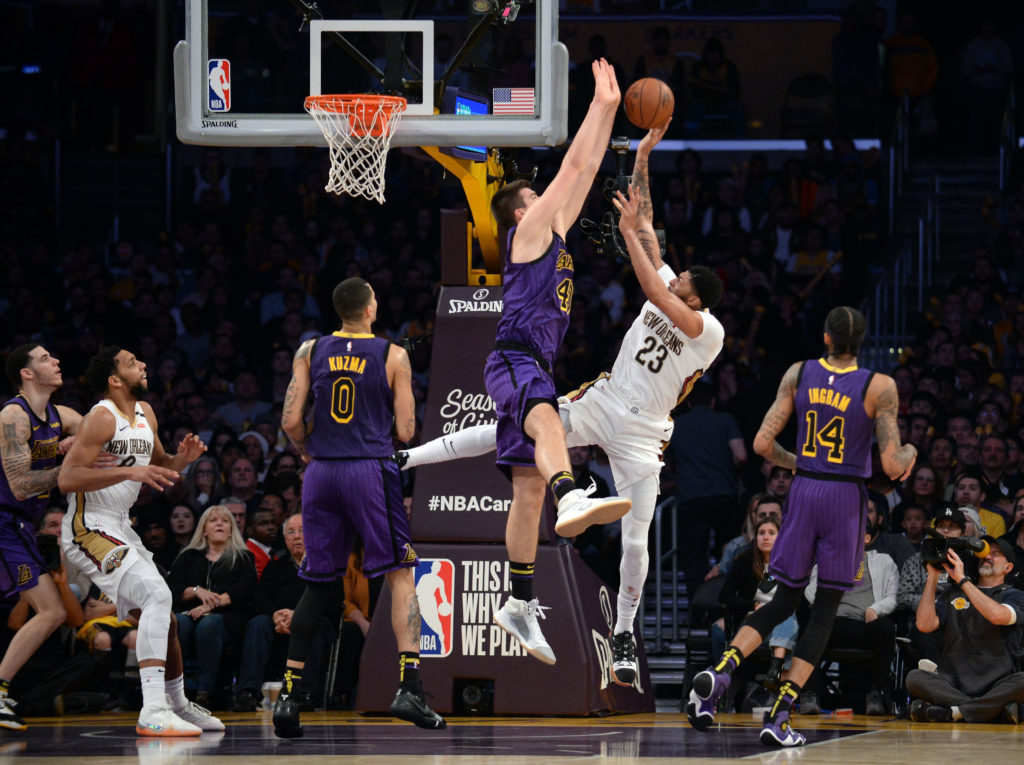 The Lakers pursuit of Anthony Davis has taken some twists and turns since Davis requested a trade from the Pelicans, but today offered a (not so final, if you ask me) proclamation by the Lakers: we’re out. From the LA Times’ Broderick Turner:

The Lakers have pulled out of conversations aimed at trying to acquire New Orleans all-star Anthony Davis because of the Pelicans’ “outrageous” trade requests, according to a person with knowledge of the situation.

Magic Johnson, the Lakers’ president of basketball operations, told New Orleans general manager Dell Demps on Tuesday morning that the Lakers had made their best offer, were not willing to add anything else and would be moving on, said the person, who was not authorized to speak publicly on the matter.

One, this was always a possibility, especially when gauging the tenor of the conversations that had reportedly taken place to this point. If you’re the Pelicans, the only way to get what you want in negotiations is to continue to say no until the offer meets the threshold you’re looking for. And, if you’re the Lakers, the only way to try to get an upper hand in negotiations when you feel you’ve already made your best offer is to go this route. It’s like when you’re buying a car — your power as the consumer lies in your ability to walk away from the table. That’s what the Lakers are doing here; they’re trying to exert some semblance of power.

Two, however, believing the Lakers are actually pulling out of these talks is very likely the incorrect conclusion. Today is Tuesday, a full 48 hours before the trade deadline. If the Pelicans were to re-engage Magic Johnson and Rob Pelinka, there’s little doubt they’d rebuff them. The Lakers are, in a way, pot committed at this point. They can try to carry over their chips to future hands (and maybe they will by, to steal another poker analogy, picking off some blinds and keeping their stack relatively clean) until the summer when another opportunity to go all in with a different hand presents itself.

But, from my vantage point, more talks will happen. Two days is a long time. My bet is that the phone will eventually ring to talk one last time. Maybe that will be Wednesday night. Or maybe it’s Thursday morning where the Pelicans can use the clock running out as another pull at leverage to squeeze one more asset out of the Lakers. But I think it’s coming.

Lastly, I think both teams have played this exactly the way they needed to. While I understand the public nature of these negotiations has a way of coloring our perceptions of both sides, if you turn off the twitter spotlight for a second, these talks have basically been:

This is a very logical and natural progression in what are negotiations of the highest stakes to both parties involved. The question now is whether a deal will get done by Thursday’s trade deadline or not. If you know the answer to that with any certainty, you’re smarter than me.

The Pelicans want to know what the Celtics offer looks like. And while there’s a possibility the Celtics offer does not include Tatum or is not as strong as you’d like, they are the only other team as (seemingly) desperate as the Lakers to get their hands on Davis. Leveraging that desperation to create, potentially, a bidding war is a viable path to getting the return you actually want. Of course there’s a possibility that doesn’t work.

But, every negotiation is measuring upside vs. downside of pulling the trigger. The Pelicans seem to see more upside in waiting and getting a better offer from Boston than downside of that offer not being what they want and then being able to re-engage the Lakers for what’s currently on the table. If they’re proven right, they’ll be vindicated. If they’re proven wrong, they’re already losing Davis so, what’s one more defeat?

Again, though, we’ll see how this goes over the next 48 hours. In the meantime, the Lakers have a game vs. the Pacers tonight and LeBron will return to action. Never a dull moment following this team.