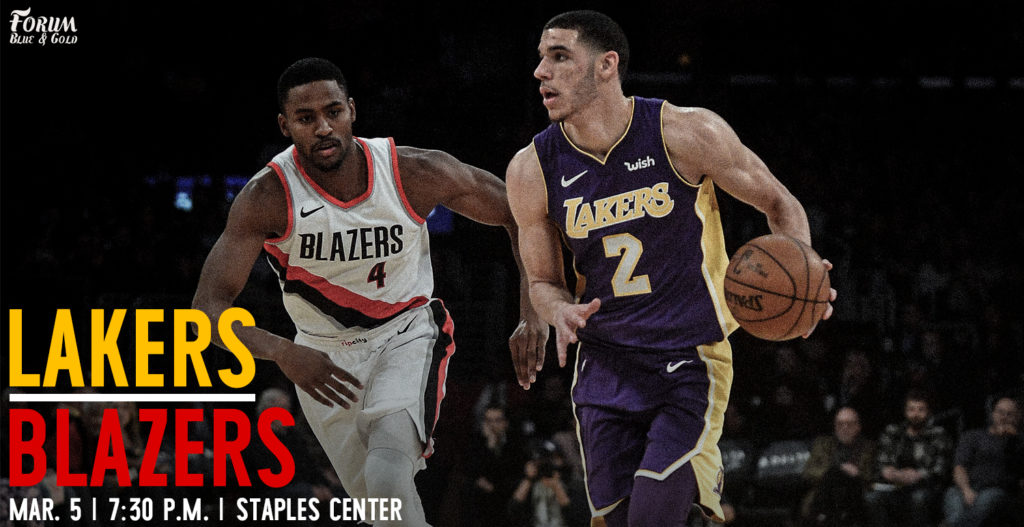 The Lakers are winners of 5 straight games and just swept a road trip of at least 4 games (going 4-0) for the first time since the 2008-09 championship season. Their last game was a come from behind win in San Antonio that saw them trail by as many as 17 points in the 2nd half and by 12 with 6 minutes left in the game, but Lonzo Ball carried them home with some clutch 3 point shooting in the final two minutes.

In other words, the Lakers are surging down the stretch with only 20 games left in the season and it’s a joy to watch.

Things, though, are going to be difficult moving forward — if they weren’t already. The team will be without Brandon Ingram for at least a week after an MRI revealed a strained groin. The team will play 3 games between now and when he’ll be reevaluated, starting tonight in Los Angeles when the Blazers visit. Portland is surging in their own right, winning 6 in a row and 8 of their last 10 games. They’ve catapulted to 3rd in the West, led by Damian Lillard who is playing tremendous basketball — pacing his team on offense and tightening up his defense from the levels it’s been in recent years.

In a league where James Harden has been unreal all year and Anthony Davis is putting up video game numbers since DeMarcus Cousins went down with injury (not to mention all the other story-lines which dominate the national discussion), Lillard has not gotten as much spotlight as he could (should?) be getting but I’m sure that just motivates him more. All things considered, you could make a case for him being on the fringes of the MVP discussion, even if there’s no chance he actually takes home the award. He’s been that good.

You can see where I’m going with this. Lillard is the main focus of the Lakers gameplan and chipping away at his effectiveness is imperative. He’s likely to compile his numbers regardless, but if the Lakers defense can make things just a little bit harder or dip his efficiency just enough they can make some headway in this game. While that’s easier said than done, there are some tactics I believe can aid them. Ensuring they chase over the top of screens, keep contain with the big man to deter straight line drives in the P&R, and then contest shots all over the court are all keys. Again, Dame is good enough to beat these coverages — he sees them nightly. But make him work and hope that translates to some misses is all you can do, so the Lakers need to, you know, do it.

Dame isn’t the only target, though. CJ McCollum is a scoring machine in his own right and cannot be put into second tier status. The Lakers must contain in isolation, lock and trail in off-ball actions, and generally stay connected as best they can. CJ can break free and get his shot going regardless and containing him means adjusting to his role as both an off-ball worker when playing next to Lillard and then being more locked into his work as a primary ball-handler when in the game by himself. So the Lakers will have their hands full. But if they want to win, that’s what it will take. Like I said, tonight will be harder.

On the Lakers side, with Ingram out, the importance of Lonzo, Isaiah Thomas, and Julius Randle only amplify. Those three are key difference makers nightly, so it can go without saying the team needs them to play well, but I believe that is especially true this game. With Randle, the Blazers are not an especially big team with their starting lineup, so Randle should get some chances to get things going inside early on. If that can translate into some success, it can open up the floor for LA’s perimeter players to get the types of open 3’s they’ve been knocking down recently.

In terms of Lonzo and IT, they’ve been playing well as a tandem since Lonzo’s come back from injury and I’m interested in seeing if that can hold up tonight — especially if the game is close, late. The Blazers have the personnel to punish IT in any of his defensive matchups, either attacking him outright with Dame and CJ or making him guard a much bigger player like Evan Turner or Mo Harkless if the Lakers try to cross-match. If IT cannot hold his own defensively, he’ll need to be great on the other end to make up for it or he might just need to watch from the sidelines.

This is one of several subplots which make this game interesting and worth your time tonight.