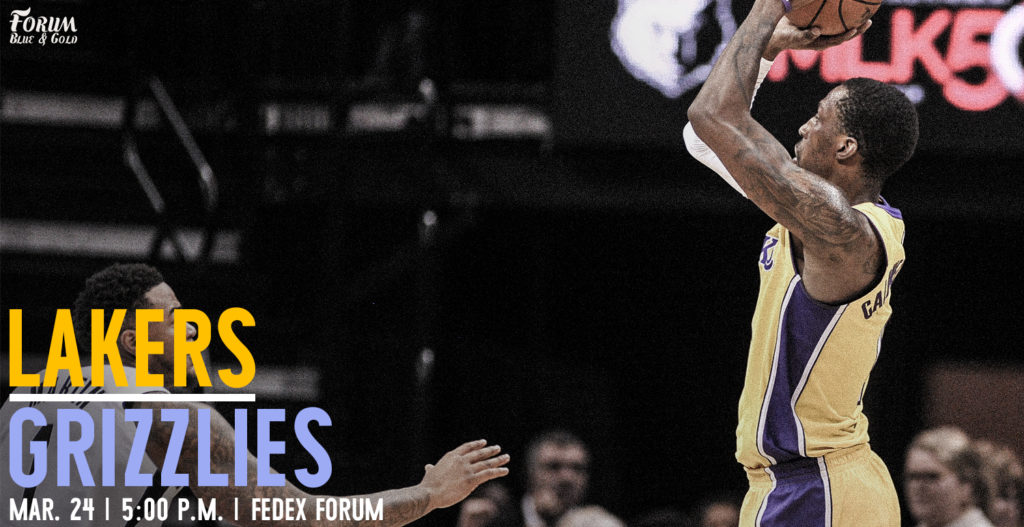 The “Lakers” play the Grizzlies today in a game that is as highly anticipated as a colonoscopy. LA is banged up and have lost 4 in a row and the Grizz are one of the worst teams in the league, winners of a single game in their last 23 contests, including 3 in a row and a 61 point loss in their last game to the Hornets.

If you wanted to go out on a date night or watch a movie instead, I wouldn’t blame you.

If you’re wondering why the Lakers are in quotation marks above, it’s because compared to the team that started the season — or, you know, even the team from right after the trade deadline — this group is barely recognizable.

Brandon Ingram remains out with his strained groin. Isaiah Thomas will also sit due to a sore hip — yes, the hip that he injured last year and that he did not have surgically repaired, but instead rehabbed through the beginning of the calendar year. So, if you’re counting at home, here is the Lakers’ guard and wing rotation for today’s game: Lonzo Ball, Kentavious Caldwell-Pope, Kyle Kuzma, Tyler Ennis, and Gary Payton II. If you want to be generous, add Travis Wear.

But Wear and Kuzma are really PF’s and Ennis is the 15th player on a 15 man roster. Gary Payton II is on a two-way contract. Not only is this not a lot of depth, but it’s (at least a couple of) players who probably shouldn’t be playing in the 1st place. No offense to them, but it’s the reality of the situation. If Hart, Ingram, and Thomas were available they’d get all the wing minutes next to Lonzo and KCP.

So, yeah, there’s a game. If you want the skinny on X’s and O’s, the Grizz still have Marc Gasol, who remains very good even if you cannot blame him for being fairly unenthused about where his team is. They also just got Tyreke Evans back from injury. Evans is motivated to play well, showing he can be a difference maker to opposing GM’s who would be looking to sign him to his next contract. With these two guys, the Grizz can be dangerous — especially to this version of the Lakers who are skidding into the final 10 games of the year.

In terms of what the Lakers offer, they will be dependent on their front court to score lots of points — something they’re very capable of doing. Julius Randle, Brook Lopez, and Kuzma can all get you 20 points. And they may have to if the Lakers want to win. With Lonzo struggling as a scorer, KCP will also need to get some buckets from the perimeter to give this offense some needed balance. I’m also interested in seeing how Luke adjusts and staggers his lineups in order to have enough offense on the floor at all times to remain competitive.

Maybe none of this matters. Maybe the Grizz are so bad that the Lakers will fall into a win tonight regardless of what happens. But, all things considered, I wouldn’t bet on that. If I had to, I’d wager on this one being generally close in the 4th quarter with anyone who’s watching wondering why, exactly, they made the choice they did.

Where you can be one of those people who made that choice: 5:00pm start time on Spectrum Sportsnet.