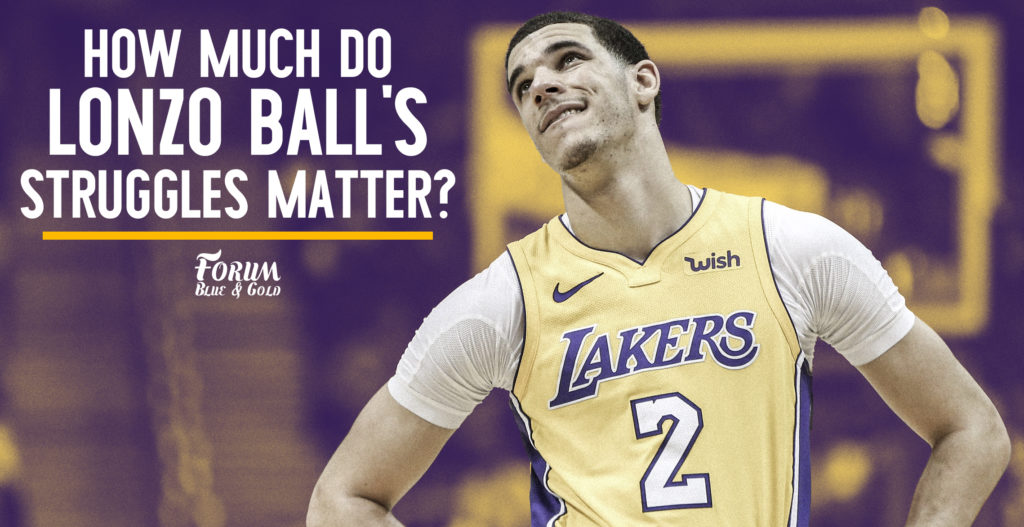 Lonzo Ball is back to shooting the ball terribly. On Thursday night, in a 128-125 loss to the Pelicans, Ball scored 6 points on 2-15 shooting. He hit only 1 of his 12(!) three point attempts, including key misses on 3 attempts from distance in the game’s closing minutes. The Pelicans dared Lonzo to beat them with his jumper, Lonzo obliged…and failed.

While there are things defenses are doing to Lonzo which are impacting his effectiveness, a not small part of these struggles are basically all on Ball. Open jumpers — even the spot up ones — are not falling. He’s rarely looking to get downhill for his own scoring opportunities, to the point that he’s actually passing up good shots in the restricted area and instead (in some cases, forcing) passes.

There really isn’t a big picture way to frame his individual offensive struggles positively, here. I mean, you can talk about him having the confidence to fire away in the face of repeated misses in New Orleans on Thursday — I did — but the other side of that coin offers negatives that we must acknowledge too.

Did continuing to shoot hurt his team? Did not diversifying his attack speak to a lack of skill/ability to find viable scoring alternatives individually? Why not attack the rim? Or look to get to the FT line? Fact is, he’s been bad finishing in the restricted area and at foul line this year, so those actually aren’t good options for him either.

So, in many ways, we have come full circle to where Lonzo was early in the year. Look at these stats:

These numbers are horrid. While there’s a difference in what his 3 point rate is in recent games compared to what it was early in the year, that barely matters if you cannot hit shots anyway. And this is where Lonzo is. He cannot hit shots. And, as noted above, it’s bleeding into aspects of his overall approach on offensively when framed within how he’s attacking offenses in the halfcourt.

How much does this matter? As with most things the answer is in the eye of the beholder and this is where context is king.

First, it’s important to remember what Lonzo was as a prospect coming into the NBA, what we knew his deficiencies to be, the current context of the Lakers roster, and, of course, Lonzo’s age/experience in the NBA.

In tacking each of these, we knew coming in Lonzo was not a prototypical point guard in the mold of most other players who play his position. At UCLA he had a usage rate under 20 and did most of his scoring as an off-ball worker. He came off picks, received dribble hand-offs, and spot up for his jumpers. He executed cuts for layups and lobs. He operated mostly as a finisher, not as an individual shot creator of his own offense.

The flip-side of that is that, then, is that we also knew he was not going to come into the NBA and suddenly be a high usage, ball dominant guard who snaked P&R’s, hit mid-range jumpers off the dribble, or suddenly became some isolation maven who was going to be a bucket getter in the mold of so many of his contemporaries.

In looking at the Lakers roster, he’s currently playing without Brandon Ingram, the lone remaining isolation worker and drive-heavy perimeter player who is a real threat to go from the 3 point line to the rim and finish effectively. While Isaiah Thomas and Julius Randle have those skills, they’re flashed less frequently — in the case of Randle he’s been more a P&R finisher and mid-post iso scorer; in the case of Thomas he’s not been the same caliber of finisher at the rim once there.

Compensating for Ingram’s missing offensive creation has been…problematic. Randle remains excellent as he’s been all season. Thomas has been up and down, with more of the latter than the former (though he’s been a nice enough passer in P&R situations, mostly to his screen partner). Kyle Kuzma has found his groove again, but he still does most of his work as PF/wing who plays more like Klay Thompson than Ingram (the guy he replaced in the lineup).

Said another way, these players have helped the Lakers remain effective and been beneficiaries of Lonzo’s passing and tempo creation, but they’ve not done as much helping of Lonzo — especially in the same way Ingram has. This isn’t in any way to absolve Lonzo for his individual struggles. In a make or miss league, he’s been missing. A lot. But I think Ingram being out has been a key ingredient in helping to explain why Lonzo’s struggled, even if the struggles themselves are still reflective of Lonzo simply not doing enough with the possessions he is using when he’s looking to score.

In saying all this, let’s zoom back out to what Lonzo is rather than what he isn’t. As discussed on our recent podcast, Lonzo is already one of the best passing, rebounding, and defensive guards in the league. Not just for a rookie, but among all players. He is the culture setter for the style the Lakers want to play, establishing the pace and mindset of unselfish ball movement the team has finally been able to adopt this year. Game in and game out, Lonzo is making key plays that help his team; plays that both do and don’t always show up in the boxscore.

These things matter, too. Yes, they must be balanced against the things he’s doing poorly. Because of this I can understand having a half empty view — even if I don’t agree with that.

But when dissecting how much his struggles matter, this context is the ultimate backdrop for me and it translates to a real belief in his future. Even in the face of a cascade of missed shots that, in the moment, can make me question that belief in the first place.