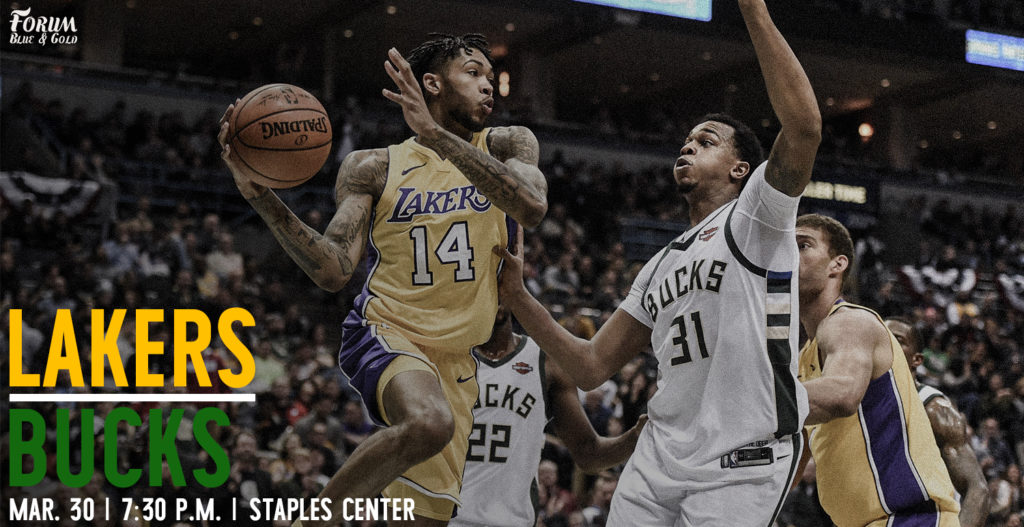 The Lakers are back in action tonight, but with more injury news — good and bad — to confront. After leaving Wednesday’s win against the Mavericks with a knee issue, Lonzo Ball will not play tonight. Lonzo is receiving treatment after an MRI revealed no damage, but is not available to play. Josh Hart, however, has been cleared for action after going through contact drills as his last step before being cleared after breaking his hand a month ago.

So, if you’re scoring at home, the Lakers now have Ingram and Hart back on the wing but are missing point guards Ball and Isaiah Thomas who is done for the year after having hip surgery. What this means for tonight remains to be seen, but expect Ingram to resume his role as de facto point guard while either Kyle Kuzma returns to the starting lineup at SF or Josh Hart gets the nod in his first game back. If I were to guess, it would be Kuzma who gets the start while giving the Lakers what would end up being one of the tallest starting lineups in the league.

One my think that’s overkill until you remember who tonight’s opponent is. The Milwaukee Bucks arrive in LA off a Thursday night win in Oakland vs. the Warriors. That game saw Kevin Durant use some magic words to get ejected in the first half, leaving only Draymond Green from their core-four all-stars to battle against the playoff Bucks. Milwaukee got a needed win, putting them 5 games over .500 and nearly cementing their status as a top-8 seed ahead of the disappointing Pistons.

Anyways, with the Bucks on a back to back, one has to wonder how much they’ll have in the tank tonight.

They still have the best player between the two teams in Giannis Antetokounmpo and a nice enough supporting cast even though reigning rookie of the year Malcom Brogdon and Mattew Dellevadova are missing from their point guard rotation. Recent 10-day signee Brandon Jennings has been giving spot minutes there and showing he still has NBA game, but with Eric Bledsoe and Giannis in tow along with Khris Middleton offering some spot duty on the wing, there’s not a huge ball handling deficiency.

The Bucks also have had Jabari Parker back for a little while, still have Tony Snell, just signed the waived Shabazz Muhammad, while offering more size up front in John Henson, Thon Maker, a Zeller and a Plumlee (which sounds like a line from the 12 days of Christmas). So, this team has some depth to mitigate playing yesterday.

In terms of specific matchups, I’m interested in seeing how Luke deploys his individual defenders. Against the Warriors the Bucks played Giannis at PF and started Tony Snell on the wing. If they do that this game, Julius Randle may end up drawing Giannis on both ends of the floor. And if that happens, I’m interested in seeing if Randle can stay out of foul trouble and how effective his bully-ball game can be against Giannis’ length and strong (albeit for a wing) frame.

I’m also interested in seeing how the Bucks defend Brook Lopez, since his matchup with John Henson doesn’t favor Milwaukee. Lopez has the strength to push Henson around down low and the range on his jumper to mitigate Henson’s strength as a rim protector. If Lopez can draw Henson away from the rim, it may open up Randle’s interior game and give Ingram a chance to finish at the rim — assuming he can create off the dribble well against smaller defenders like Bledsoe (or Middleton).

If there’s one more thing to watch for this game at the team level it is who can control the pace. The Lakers play at the fastest pace in the league while the Bucks play nearly 5 possessions slower and 23rd fastest. The Lakers would do well to get out into the open court often, not only to turn the tempo in their favor but to put pressure on the Bucks’ legs to see if they’re able to hold up after playing last night.

Mind you, if the Lakers are able to push the tempo they must also take care of the ball. The Bucks have length and enough athletes to create turnovers and score quickly off those miscues. On Thursday, the Warriors had 15 first half turnovers that the Bucks turned into 21 points, giving them the foot hold they needed to establish themselves before KD got ejected and turned the game more in their favor.