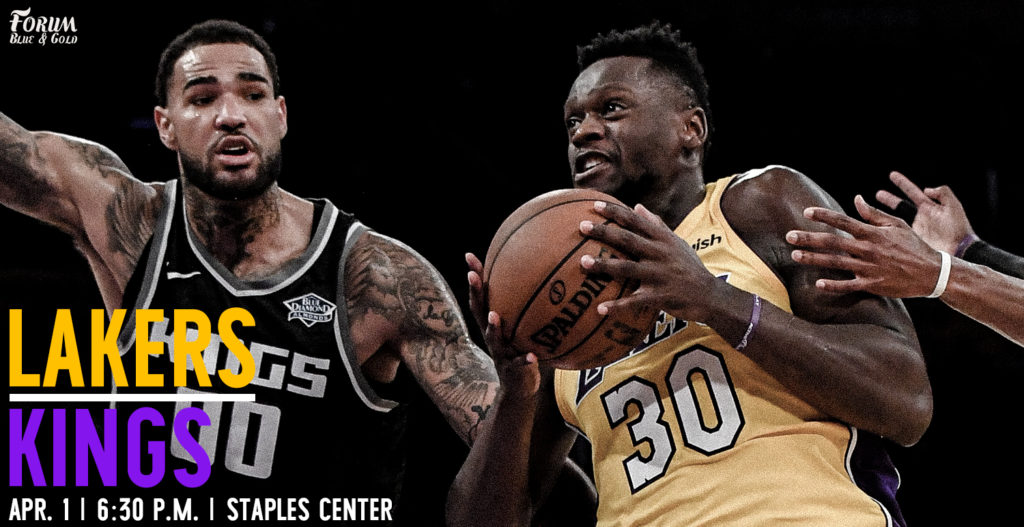 The Lakers had a tough loss on Friday to the Bucks, an overtime disappointment that saw the team scramble back from a big deficit to even force the OT only to fall behind in the extra frame and fight back again to have a chance to win the game on a Kyle Kuzma jumper in the closing seconds. That shot didn’t fall, so the Lakers did.

The Lakers lost more than a game vs. the Bucks, though. Brandon Ingram left the game late and did not return. On Saturday, after an examination, he exhibited symptoms of a concussion and was placed into the protocol program to deal with such issues. Ingram will now need to clear several hurdles before being cleared to play again, putting his availability in question for the team’s upcoming games (I’d be surprised if he’s back for either of the team’s back to back games on Tuesday and Wednesday).

With Ingram out and Lonzo still listed as day-to-day with a knee contusion, the Lakers are again dealing with concerning depth issues on the wing. If Lonzo does not play, the team will be down to only Tyler Ennis and Alex Caruso at point guard and will need to get creative in how they manage their ball handling responsibilities should either of those players falter.

That especially matters for today’s game when the Kings visit Staples Center. Sacramento is not a good team, but they have a pair of rookie point guards in De’Aaron Fox and Frank Mason who have proven to be able to threaten defenses.

Fox has had an up and down rookie campaign, but his physical abilities stand out on tape just as they did at Kentucky. He is fast with the ball and can get downhill quickly — especially in the open court. As for Mason, he’s been steadier and proving to already be a viable backup PG in the league. Caruso and Ennis will have their hands full dealing with these two, especially if they’re not aggressive offensively themselves.

In terms of the other matchups, the Lakers will need big nights from their front court. Julius Randle, Brook Lopez, and Kyle Kuzma are all capable of doing damage against any team and they’ll need to be on their games tonight. I’d like to see Lopez get his game going early as he can certain establish the post against any Kings big man they throw at him. Even Lopez can threaten the paint, he can anchor the team’s half court sets and allow for the rest of the guys to work off him via cuts and spot up options when help comes.

Regarding Randle, I expect him to play his normal game. Randle has become a 20-10 guy almost nightly by working the interior, mixing quickness and power to score nearly at will. Playing opposite of Lopez, he can have similar success and also force help to come. In those instances I’d like to see him drive and kick a bit more to create spot up options for Kuzma, KCP, and Josh Hart.

Defensively, the Lakers need to defend the arc. The Kings rank 3rd in the league in 3 point field goal percentage and have several shooters who need to be marked at all times. Buddy Hield and Bogdan Bogdonavic can both light it up and neither have any fear of firing from several feet behind the line. The Lakers wings must have discipline defensively, pick their men up early, and ensure they’re tracking well when the Kings run them off picks and when they’re relocating off ball.

Lastly, the Kings are tanking, but that means little when these teams play. Sacramento always seems to get up to play the Lakers and I get the sense that regardless of who is in the game, they’re going to play very hard and look to get this win. The Lakers are short handed, but they cannot mistake what the Kings are doing organizationally for how the guys on the court are going to go at them.

Where you can watch: 6:30pm start time on Spectrum Sportsnet and NBA TV.