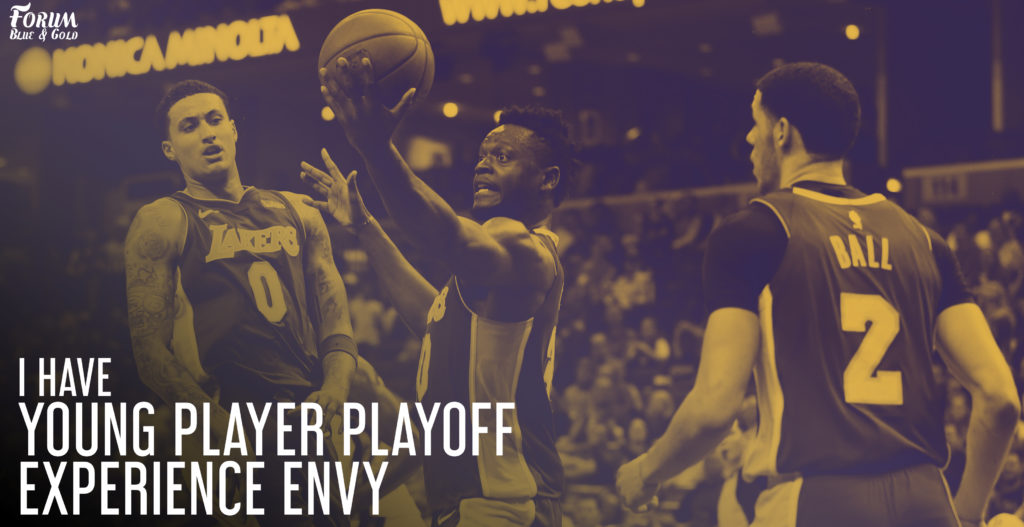 The playoffs are in full swing and I must admit I am jealous — though maybe not in the way you’d think. Of course I miss the Lakers playing in these types of meaningful games. Sports, for me, are as much about the stakes as they are the daily entertainment offered.

I mean, I love a good heel turn or a huge scoring outburst or a role player coming out of nowhere to make a bunch of winning plays as much of the next guy. But to do those things when the stakes are highest? It’s like that scene in Half Baked where Jon Stewart is asking his delivery guy if he’s ever done all these different things on weed — Have you ever watched Scent of a Woman…on weed?.

That’s the stakes of the playoffs — they enhance all these everyday things from our favorite players to levels above what they normally are.

So, of course I’m jealous of all these teams showing out on the ultimate proving ground of playoff basketball. But, more than than, I’m jealous of some of these teams’ young players getting an opportunity the Lakers’ young horses are not.

I look at the Jazz, 76ers, and the Celtics specifically, and see their young players — these young stars in the making — showing out on the big stage and get wistful. Ben Simmons, Donovan Mitchell, Joel Embiid, Jaylen Brown, Jason Tatum…shoot, even Terry Rozier, these guys are getting huge minutes and are being given the ultimate gift: the the chance to succeed or fail when the stakes are highest (something I recall one retired Laker getting back in the day and that failure leading to greatness).

And, for the most part, they’re succeeding. And it’s just so great to watch as a fan of the game.

I wish Brandon Ingram had that chance. That Julius Randle, Lonzo Ball, Kyle Kuzma…and even Josh Hart were in position to make an imprint on games that mean this much.

Could they handle it? Could they excel? Could they raise their games from what they were in the regular season? Do it against refined and sharpened game plans against the same opponent night after night? Could they take to the coaching which would require them to execute at a higher level? And do against opponents what those guys are tying to do against them when the schemes on both ends become more focused?

We don’t have the answers to those questions yet. And I wish I did. Just to see how it all goes. The regular season might be where stars are born, but the playoffs are the wilderness where they’re forced to fend for themselves and show they can survive for the long haul. It’s where reputations are earned and cemented.

As an aside, it’s been interesting watching the Cavs series for a variety of reasons — the pre-The Decision parallels are hard to ignore for LeBron — but no reason stands above my Lakers interests in seeing how Jordan Clarkson and Larry Nance are performing on this stage.

So far, the results are mixed. Clarkson has not played well overall, operating at a subpar level offensively while offering below the level of defense he was playing in the lead up to his trade to Cleveland. Nance has been what he’s been most of his career — a solid if unspectacular role player who offers some defensive chops, a lot of hustle plays, but not enough offense.

The Lakers brass traded these two as a means of opening cap space, but one has to wonder if they had foresight into what they could be on this stage in the future when LA would be competing for more than what they have been over the previous 5 seasons. Or maybe that’s giving Magic and Pelinka too much credit. We’ll never know.

The fact is, though, that the young players who remain in Los Angeles are still looking for their chance to be where Nance and Clarkson are. And, even more, they’re waiting on their chance to see if they can play to the level that Mitchell, Simmons, et al are showing right now. And I’m jealous of that.

Here’s to the Lakers young guys getting their chance soon, and more, showing they belong.