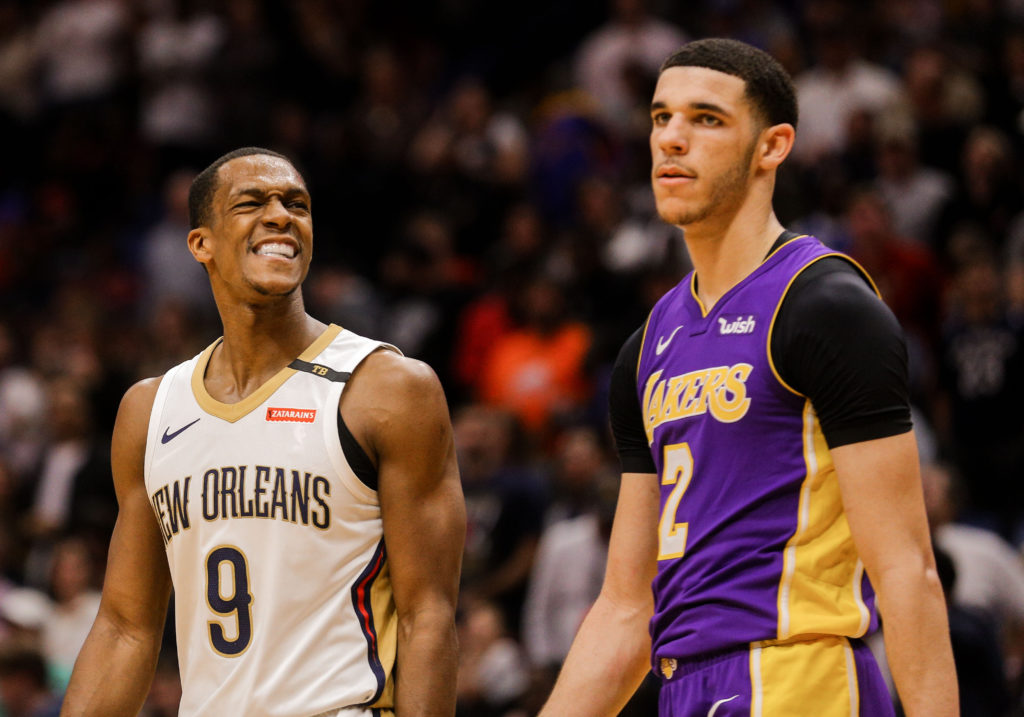 It’s been a couple of days since the Lakers renounced their free agent rights to Julius Randle and quickly pivoted to sign Rajon Rondo to a 1-year, $9 million deal. In the instant reaction world of online analysis, one would expect a site like this one to quickly process these events and spit out a post for mass consumption.

I, however, needed some time before I could fully capture what I wanted to say about all this. Rondo, more than bringing back KCP or signing Lance Stephenson or adding JaVale McGee is the move that crystalized the Lakers post-LeBron intentions for this upcoming season for me. And it took a conversation with Pete in our most recent podcast and an excellent post by Reed to deconstruct the Lakers free agency period to this point to help inform how I viewed the Rondo signing within this larger framework of team building.

First, I thought many of Reed’s points were spot on when discussing Rondo. This section particularly stood out to me as pertinent:

Fourth, Rondo is an INTENSE competitor who processes the game at a truly unique level. Brian Scalabrine, one of his Boston teammates, said that Rondo is the “smartest basketball player I’ve ever played with.” Lebron recently recalled that “Rondo was calling out sets every time” during his Boston battles, disrupting Cleveland’s plays at the outset. As others have noted, Rondo could be uniquely positioned to mentor Lonzo given the latter’s cerebral approach to the game.

Rondo also brings a competitive edge that fits with the culture that Magic is trying to instill in the young core. Remember Rondo being ejected within minutes of Isaiah entering the game last year… Or knocking heads with Ray Allen after he left for Miami… Or going toe to toe with Lebron when Rondo’s Celtics beat Lebron’s Cavs. Or, frankly, giving the Lakers fits when Boston won the 2008 title.

As Reed laid out above and as Pete mentioned in our pod, the Lakers have targeted some real assholes in free agency. Rondo exemplifies this. There players who compete nightly and then there are guys who will do anything to win. These things often overlap, but guys who are the latter can be extremely valuable from a culture building standpoint. Rondo, I believe is the latter.

I think he will bring an edge to this team, upping the competitiveness not only in games, but in practices, in film sessions, in…everywhere. Kobe once noted that one thing he truly believed as a player was that a certain amount of conflict was good for teams who compete at the highest of levels. Phil Jackson instilled that in him and Kobe often served as the embodiment of that for the most successful teams he was on. This was often balanced out with more of the velvet glove and togetherness spirit inspired by other team leaders (and, at times, with Kobe offering the same arm-around-you leadership players like Fisher, Shaq, Odom, Gasol, etc would offer).

Rondo, I think, will be one of the catalysts for this upping of conflict on this roster and I believe it can be a positive in advancing the Lakers rah-rah, fun culture Walton has established as a foundation for this team. Walton, who played with Kobe and under Phil and happened to also coach Draymond Green, should value how this type of player and personality can help take the competitive spirit of this team up a notch.

I think Magic Johnson and Rob Pelinka value this too. And, so, Rondo is a Laker. If you’d have asked me a year ago whether I supported adding a player of Rondo’s type and ilk, I likely would have been against it. Now, though, I am more open to it. And I think it can be a successful marriage. Whether it is or not…well, we’ll see. I’m hopeful, but I’m also realistic. Best case outcomes are just that, best case. Few things rarely reach their best case outcome and that’s the reality we live in.

As for Rondo’s on court fit, it’s both tricky and comes with potential pitfalls while also offering some very clean and obvious benefits.

On the former, Rondo isn’t necessarily a bad shooter as much as he can be a reluctant one who turns down good shots too often. These record scratch moments of turning a semi-open or truly open looks into a plays where he looks to pass or penetrate can gum up a team’s half court offense and lower overall efficiency.

These are the moments where a pairing with LeBron would be especially poor; LeBron’s passing ability has traditionally been best utilized by finishers, not players who are looking to be a ball mover or hunter of an even better look. These two finding the right chemistry will take time, regardless of how smart both players are. And, if we’re being honest, it may not come at all.

The same can be true of finding a successful on court relationship with Lonzo. I mean, this is the first thing I thought of when I read the Lakers had signed Rondo.

On the positive side of the ledger, Rondo’s ability to manufacture convertible shots at the rim for himself and his teammates in both open and half court situations is exactly what the Lakers have wanted to do under Walton. Last year the Lakers led the league in points in the paint and Rondo will undoubtedly help the Lakers maintain a high ranking in this category next season.

In New Orleans, after DeMarcus Cousins injured his achilles, Rondo was key in the Pelicans ramping up their pace to insane levels. As much as he’s billed as a ball-dominant player, he showed no issues in throwing the hit-ahead pass, no issues in racing up the floor himself to seek shots in early offense. The Lakers want to play fast and Rondo can help there.

Rondo is also another fantastic passer on a team which already has two of the best. Adding him to a roster with Lonzo and LeBron ups their passing IQ to a level near or at the top of the league. He will find cutters, spot up shooters, lob threats, pick and pop bigs, and any other player who is open — even if the window is small. He will find players who are not open at all, and he’ll do it in ways which create baskets. There’s a reason he’s often among the league leaders in assists and it’s not just because he always has the damn ball.

I know the stats don’t favor Rondo in a lot of ways. I know his defensive reputation outpaces his actual results. I know how the surliness and general demeanor he can carry himself with doesn’t always translate to an environment people want to play in. Kobe once famously called him an asshole, and Rondo thought it was a great compliment. And coming from Kobe it was! It’s like Usain Bolt saying you’re fast. But some people don’t like assholes; it’s not that endearing to everyone, you know?

But, sometimes you need some of that on your team. Julius Randle was one. Now he’s gone. So, yeah, I look forward to some of that surliness.

What I also look forward to is an increased level of competition at every position on the floor. Ramona Shelburne said that when Rondo was signed he was told the “best guy will play” in reference to his competition for minutes with Lonzo. People can gasp at that, and I get it. Lonzo was the face of the franchise just 4 months ago and now he could be a reserve? That seems wild.

But, and I truly believe this, Lonzo has a great opportunity to grow and show he is exactly what so many of us — including, I believe, the Lakers coaches and front office — think he is as a talent. And if he does show that, the Lakers will have themselves a player worthy of the hype and who will produce on the court with a style of play which helps his team win games. If adding Rond, and the inherent competition which comes with him, only helps accelerate the timeline in which we get that version of Lonzo, he’s worth what the Lakers are paying him even without any on-court contributions.

In the end, then, I think the Rondo addition can be a real positive. Of course there are questions and it can all go bad. I get the jokes being lobbed at the Lakers and their fans after the news broke Monday and after the deals the team made Sunday in the wake of adding LeBron.

But, I get the risk the team is taking here and when viewed through the spectrum of wanting more dog and competitive spirit on the roster, these moves make sense. And, I think, on the floor there will be some tangible benefits too. It’s a worthy experiment that, if nothing else, will keep us captivated even if one would argue we would have been that anyway with LeBron in the fold.