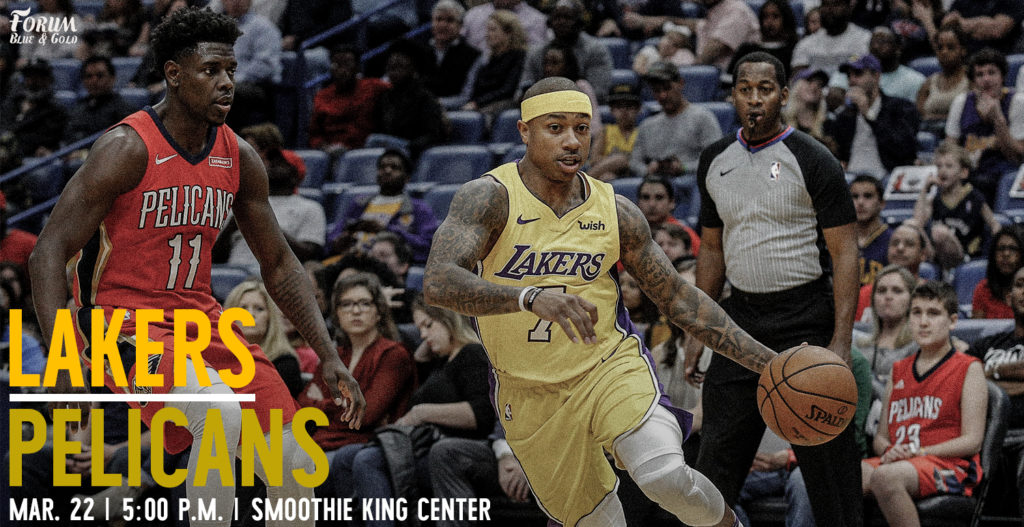 Apologies up front for the abbreviated game preview, but here we go. The Lakers have had a few days off and considering their health situation, they needed that rest. Their front line players have been carrying an amazing load of late, pushing the high 30’s in minutes nightly just to stay in games. While the team has been playing 9 guys, only 6 are guys who would normally be in the rotation and Luke has explained that he’ll have a shorter leash for those last 3 guys — especially on the road.

One would think that will remain true again tonight vs. the Pelicans. Brandon Ingram remains out with his strained groin, so the team’s depth only continues to suffer. The hope was that Ingram would ramp up his workouts and return today, but after experiencing soreness on Wednesday morning the doctors are holding him back tonight. With Josh Hart still out the Lakers are reeling on the wing — a topic we dissected in our most recent podcast.

If you hope to pick up some pity points, though, don’t hope for much when it comes to the Pelicans. Due to a rescheduled game due to a leaky roof earlier this year, this will actually be NOLA’s 3rd game in 3 nights(!) and they have to play a 4th in 5 nights on Saturday. And while they’ve rallied without DeMarcus Cousins via super-human performances by Anthony Davis and stellar play from Jrue Holiday, I’d imagine they’ll be dragging some tonight.

So, I guess this will all come down to this simple analysis: can a more rested, but severely depleted Lakers team beat a surely tired (and somewhat banged up) Pelicans team? Can they do it on the road while playing against Anthony Davis? Let’s just say, even though there are real factors that favor the Lakers, I have my doubts. Davis is that good and with playoff seeding hanging in the balance every time the Pels take the floor, I have a sense they’ll conjure up a good effort, no matter how tired they are.

Still, though, the Lakers could really a win here. They’ve lost 3 straight games and still have two road games after this one on their road trip. A big scoring night from Isaiah Thomas would go a long way, as would some shot making from Lonzo Ball. Add in standard performances from Kyle Kuzma, Julius Randle, and Brook Lopez and the team should be able to hang tight until late in the game.

And, really, that should be the goal. Keep the game close and hope that you can play well enough down the stretch to take advantage of what should be some mounting fatigue on the Pelicans’ side. We’ll see if the Lakers can follow the script.

Where you can watch: 5:00pm start time on Spectrum Sportsnet.