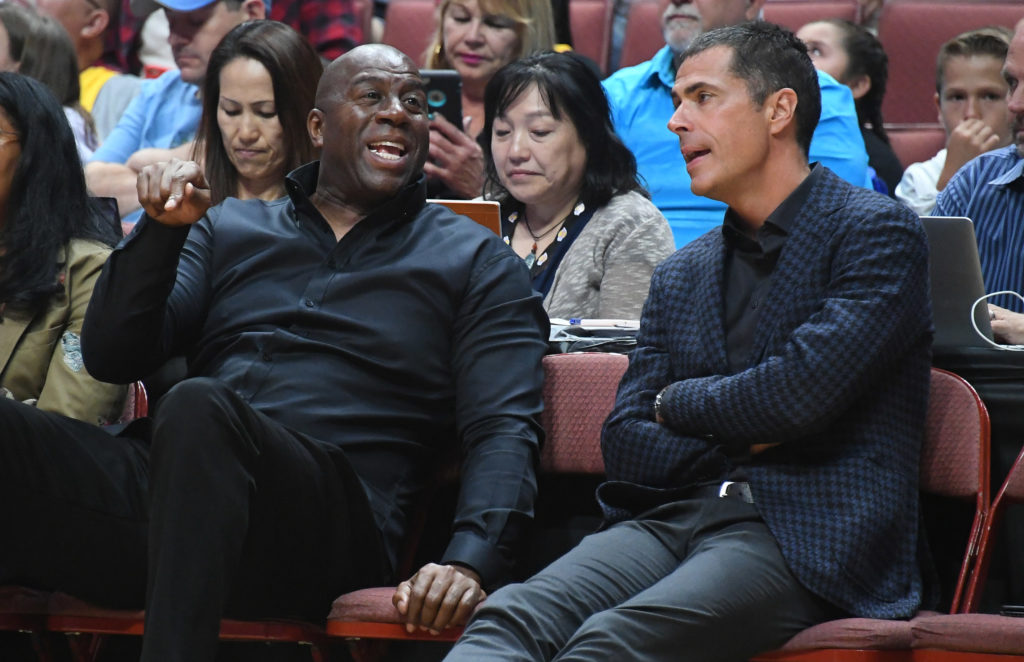 With Lebron so quickly in the fold, we know that Magic and Pelinka will now aggressively (but opportunistically) pursue other available stars in their quest to build an enduring dynasty around Lebron. The Kawhi saga endures, and every day we hear rumblings that another possible option may materialize – Butler, Lillard, Kemba, Wall, McCollum, a recovered Cousins next summer, Golden State not being able to keep both Klay and Draymond, etc, etc. And this is why it was so critical to get that first star—and Lebron above all—in the fold. The Lakers are now positioned to leverage Lakers tradition, Los Angeles, and Lebron, to attract top tier talent. The future is bright.

And thanks to a series of cap clearing moves since the new front office took over, including shedding Mozgov/Russell and Clarkson/Nance, the Lakers have a healthy cap sheet that provides substantial flexibility to add pieces around Lebron. Indeed, consider the net result of those two critical trades.

In addition, we must also remember, right after taking control from Kupchak and before Pelinka was brought on as GM, Magic traded Lou Williams for the pick that ultimately became Hart (after another trade with the Jazz which also netted the pick that turned into the recently waived Thomas Bryant), adding yet another key member of the young core.

All of this underscores the brilliance of those deals and the benefits of drafting so well. The Lakers not only cleared Mozgov’s salary, but they arguably upgraded at least in terms of return on contract value from Russell and Nance to Hart and Wagner, respectively. Trading in the NBA is competitive business, and I credit Pelinka for scoring two unequivocal wins with his initial trades, which have enormous impact on the Lakers roster building options. As a result, the Lakers now have room to chase max level free agents even after adding Lebron’s 35% max salary, and they replenished their youth in the process.

But while the Lakers have tremendous options for building the roster from here, their options are still finite. Indeed, with Paul George (and his third rate documentary crew) choosing the team with the least cap flexibility, the path to adding two max stars to Lebron are limited. This piece will review the Lakers cap options for adding star talent so that we can all accurately speculate about the endless options on twitter…

The bottom line is that the Lakers have the following options for adding max level stars:

Note that you can find these scenarios mapped out on the google spreadsheet that is linked in the tweet pinned to my twitter profile (@reed_nba).

Signing One Max Free Agent in 2019 and Keeping the Core

The simplest plan would be to keep all the young core, play out this year with the current roster, and then pursue the deep collection of available free agents next summer. If the Lakers don’t take any new salary past this season, and trade Deng next summer with their 2019 first, then the team projects to have $45.1M in cap room:

Alternatively, if the Lakers cannot find a taker for Deng, they could just stretch the final year of his salary over three seasons ($6.3M per season), keep their 2019 first, and project to have around $37.8M in room (assuming the first round pick was paid around $2M). By letting Randle go, the Lakers therefore control their ability to create max space for Kawhi next summer, which is critical for leverage in current negotiations.

But, if they could deal Deng without any salary coming back, the Lakers could thus sign Kawhi, Butler, Klay, or another 30% free agent (costing $32.7M), keep the core (Ingram, Lonzo, Kuzma, Hart, Wagner) and have $12.4M leftover to fill out the roster. The team would possess the Bird rights for all players, could sign whatever extensions they wanted, and operate as an over the cap (and eventually tax) team going forward.

The team would have Lebron, another in his prime star (e.g., Kawhi or Butler), and five under-24 talented young players on the rise at different positions (Ingram, Lonzo, Kuzma, Hart, and Wagner). They could also package young players along the way for stars that become available (cough, Anthony Davis… Giannis…), with salary matching easier once Ingram’s salary is extended at a higher level.

This is a fantastic option, but it requires patience during year 1 of Lebron, and some level of trust that someone else will come. (They will).

Trade for One Star Now

A second option would be to trade for Kawhi or another star player now, both to try and maximize winning during Lebron’s shrinking window, and also because Kawhi is available now and top 5 players in their prime don’t come along often.

To me, the best way for the Lakers to facilitate a Kawhi trade now would be to (1) not spend their remaining $5.7M in cap room yet, (2) stretch Deng (which has to be done by August 31 or his $18M salary counts in full for next season), and (3) thereby stay far enough below the cap that they can trade for Kawhi without having to include Deng or salary match.

Assuming that the trade ended up at Ingram plus two future unprotected 1sts for Kawhi, the resulting cap picture would look like:

And the trade will still work under the cap if the team added Hart or Kuzma to the deal, although I wouldn’t feel great about doing so. Note that Kawhi’s max salary for next year would be $32.7M, but the Lakers could slot him in at a lower $30.2M hold (150% of his prior salary), and thereby save another $2.5M in cap room for next summer.

As a result, LA would (1) just barely stay under the cap ($1.2M left) and (2) have $14.9M to spend next summer. This scenario where Deng’s salary is stretched is my preferred way to deal for Kawhi, rather than paying the additional cost to include Deng or offload him to a cap team (likely two more 1sts). The downside is having Deng on the books for five years, but the Lakers will be over the cap anyways after next summer, so I don’t see that as costly as giving up two 1sts to unload Deng.

I suspect that LA has Lopez on hold and will wait to sign Lance/McGee, until it either makes some version of this trade or determines that a Kawhi trade is not possible this summer. Once the Lakers use up the rest of their $5.7M in cap room and/or sign Lance, this option goes away and the team would have to unload Deng in any Kawhi trade.

Note that this option works equally well for Butler in place of Kawhi as their current salaries are close enough to not materially matter.

With George choosing OKC, I only see two ways to pull off adding two max stars to Lebron:

Trade for One Max Player Now and One During the Year

First, LA could trade for Kawhi now and then trade for another star during the season when Magic and Pelinka can include their new free agents in the trade (Rondo, Lance, etc. are eligible to be traded after December 15). Note that KCP has a no trade clause and can veto any trade this year.

For example, they could execute the Kawhi trade discussed in the last section: stretch Deng, deal Ingram and future picks for Kawhi. Then after December 15, they could trade for Butler using some of the newly signed FAs. LA would be over the cap and need to salary match, requiring them to send out at least $15.84M in salary for Butler (so that they are not acquiring more than 125% of the salary sent out). An example that works under the CBA: deal Rondo ($9.0M), Lance ($4.5M), Kuzma or Hart ($1.7M), and Svi ($0.8). The Lakers would then have Kawhi and Butler’s Bird rights and could go over the cap to re-sign them this summer.

Note that these maneuvers for Kawhi and Butler are easier because they are under “smaller” maxes signed years ago at only around $20M in salary this year. Lillard, on the other hand, is making $27.9M this year and would be more difficult to acquire. The Lakers would not be able to pull off the Deng stretch move and stay under the cap enough to acquire Lillard, which means Deng would have to be outright traded if they wanted to deal for Lillard this summer. If they tried to obtain Lillard during the season, the Lakers would need to send out at least $22.3M in salary, which would practically mean including Deng (if not already stretched) plus young talent, or several of the “larger” salaries (some combination of KCP, Rondo, Lonzo, Ingram, and other pieces to reach $22.3M).

Trade for Two Max Players During the Year

A second path to adding two more max players would be through executing two trades during the season. In each trade we would need to salary match (take on no more than 125% of outgoing salary), but this would be possible once the new FAs are eligible after December 15.

As noted previously, a deal for Lillard or a higher max salary is more difficult, but the Lakers still have the pieces to make this work if Deng is included in one of the deals.

What is Not Possible

Finally, a word on what is not possible under the CBA.

First, I do not see a feasible way to trade for two max level players this summer. The ONLY possible option would be to (1) deal Deng, Kuzma, and pieces for one star (Kawhi/Butler/Lillard), and (2) deal Lonzo AND Ingram, plus other pieces for Kawhi or Butler (given their “lower” max salaries). But I do not see the Lakers being willing to include Ingram and Lonzo in the same deal, nor should they. And I also do not think Deng plus Kuzma nets a star without Ingram or Lonzo included. As a result, the math doesn’t practically allow the Lakers to deal for two stars this summer.

Second, and this is contrary to many scenarios offered on Lakers twitter, the Lakers cannot acquire one max star now and then have room left over to sign another star next summer. The ONLY way to add Kawhi now and create max level space next summer ($32.7M) would be to unload Deng, Lonzo, Ingram, Hart, their 19 first, Svi, and two of Kuzma/Wagner/Hart:

In the scenario above the team is still short and would have to add Wagner to the trade. At that point they would only have Lebron, Kawhi, and one of Kuzma/Hart/Wagner left. I don’t see that as a viable way to building a roster.

This piece shows that the Lakers can pull off deals to add two max level players to Lebron, but the cost would obviously be painful, sacrificing key young players and roster depth. I am not going to analyze here what specific deals would be worthwhile in my opinion, and leave that to everyone else with a clear sense of what is mathematically possible.

But I will say that the Lakers are extremely well positioned for the future, with one of the healthiest cap sheets in the league, and unbelievable flexibility to build a roster around Lebron. Fans should be grateful that any of these paths are reasonably possible, whether they strike a major deal now to add Kawhi (and more) to Lebron, or just let the core develop and see what opportunities (UNIBROW) arise down the road.

The primary goal of fandom is to have a team worth obsessing over, and the Lakers are positioned to fulfill that mandate…