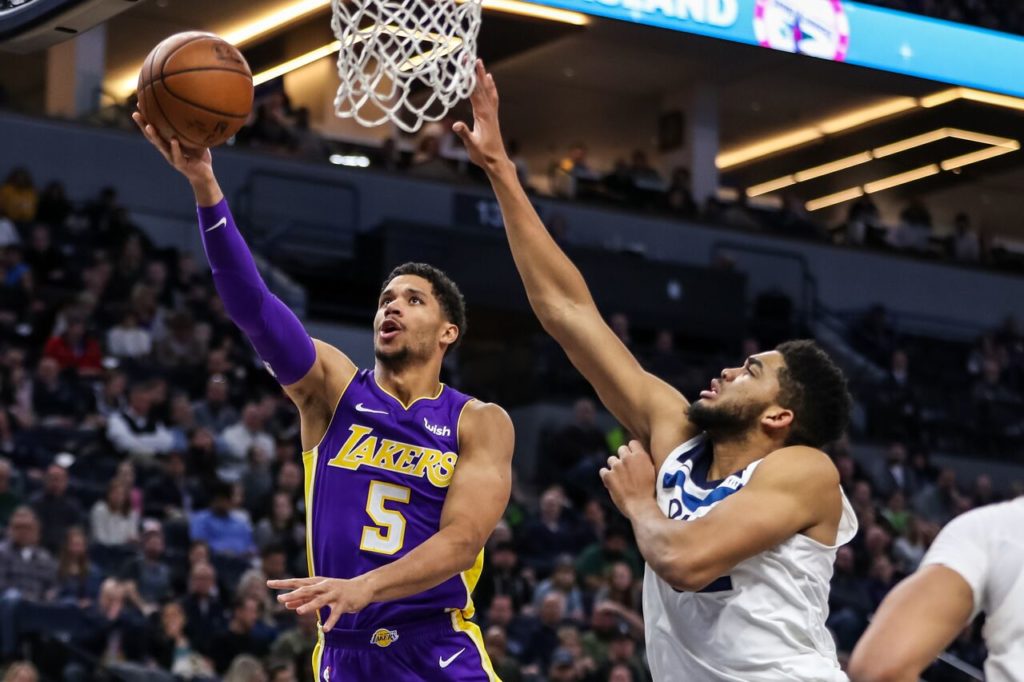 Let’s get all the caveats out of the way right away. It’s only summer league. He is a 2nd year player who had a substantial role as a rookie. Schemes are simplified on both sides of the ball, which can make it easier for experience players to thrive. All of these things matter to one degree or another and offer context.

Still, though, this matters too: Josh Hart is playing fantastic for the Lakers summer league team and, in doing so, is showing he can be a vital piece to the Lakers success during the regular season.

Much of Hart’s strong play has come from taking on an increased role offensively while showing a greater diversity in how he’s been able to score. On the main Lakers team, Hart was mostly limited to scoring in transition, getting put-backs, and as a spot up shooter. However, in Vegas Hart has taken on a role more in line with what you’d expect from Brandon Ingram, handling the ball earlier in possessions while creating shots for himself in a variety of situations.

It remains to be seen if Hart’s newfound ability to be a primary shot creator has any sustainability when his teammates change, but him showing these skills in Vegas is nonetheless encouraging. Especially when you consider the types of shots Hart is taking and making.

Here, for example, is Hart handling the ball in a shoulder pick and roll situation on the right side of the floor. After a ball exchange with Caruso, Hart uses a Wagner screen to go middle and get separation from his defender, and then further accentuates that separation by stepping back into a rhythm 3 pointer.

It’s not only that Hart made this shot, it’s the comfort level and technique he showed to even create it. As noted, Hart has typically done most of his work as a shooter spotting up. This type of growth to not only create the shot off the dribble, but to do so with a rhythm step back is excellent.

Here, too, is Hart creating a shot for himself out the P&R, but this time by simply rising up when his man dies on a screen after being unable to decide if he was going to fight over the top or go under.

What impresses me here is the recognition, decisiveness, and confidence to rise up and take this shot in the manner he did. So much of scoring ability in the P&R is making the simple and necessary read quickly and Hart has done that, as he did above, consistently in summer league.

Here is more of that same recognition I described above, but this time on a drive.

This seems simple, but there’s a fair amount of savvy and smarts on display.

Look at how Hart feints as though he’ll go away from the pick to set up his defender before actually using the screen. This tactic allows Wagner to set a good, solid pick which Hart uses well to attack the hedge man. Once he engages the hedge, he uses a slight hesitation to fool the big man into begin his recovery back to the roll man. Once Hart sees the hedge man turn his back to recover, he turns on the jets to drive the paint and finish at the rim.

If the above is how you treat a hedge and recover, here you see Hart handling a straight up switch by actively engaging the big man after receiving a dribble hand-off.

More good recognition and technique from Hart, here. After understanding the big man switch is there, Hart pursues a hard drive to flatten out the big. Once he recognizes there is no angle to the rim, he deftly uses another step back to create an elbow jumper.

Even if this shot didn’t fall, it would be good recognition and understanding from a player who is being depended on as a go-to scorer. That Hart does hit it, though, shows another step up in his game from last year. In his rookie season, Hart was rarely on balance when taking these types of shots, not getting enough legs into his step back + gather, and thus leaving this shot short. Here, though, you see the improvement in footwork to plant his right foot and then explode into his hop in order to elevate with good strength and balance.

All of this improved shooting, whether off the dribble or in more traditional spot up situations, has defenses running hard at Hart to contest shots. These types of closeouts then lead to what remains one of the stronger aspects of Hart’s offensive repertoire — finishing in the paint.

Hart’s ability to quickly recognize the defender running hard, get to his preferred right hand, and then navigate second level defense while finishing an off-balance shot over a shot-blocker is just wonderful skill and speaks to a knack that Hart has for getting off good looks around the paint regardless of defensive pressure.

Now, don’t get me wrong. Do I envision Hart becoming a high level/primary scorer for a good team? No, I do not. But the skill and improvement Hart is showing offensively should not be scoffed at either.

Even if Hart is never more than a role player on a really good team, this type of growth and ability is meaningful. Shot creation, be it secondary, late clock, versus bench players, or because of temporary role adjustment has immense value for any team. And when it comes from someone who is not relied upon do it, it only makes it more valuable within the context of your overall roster construction.

We will see how much of this can carry over to training camp, preseason, and then the regular season. But Hart showing the makings of having this type of shooting and shot creation in his bag bodes well for him and the Lakers long term.