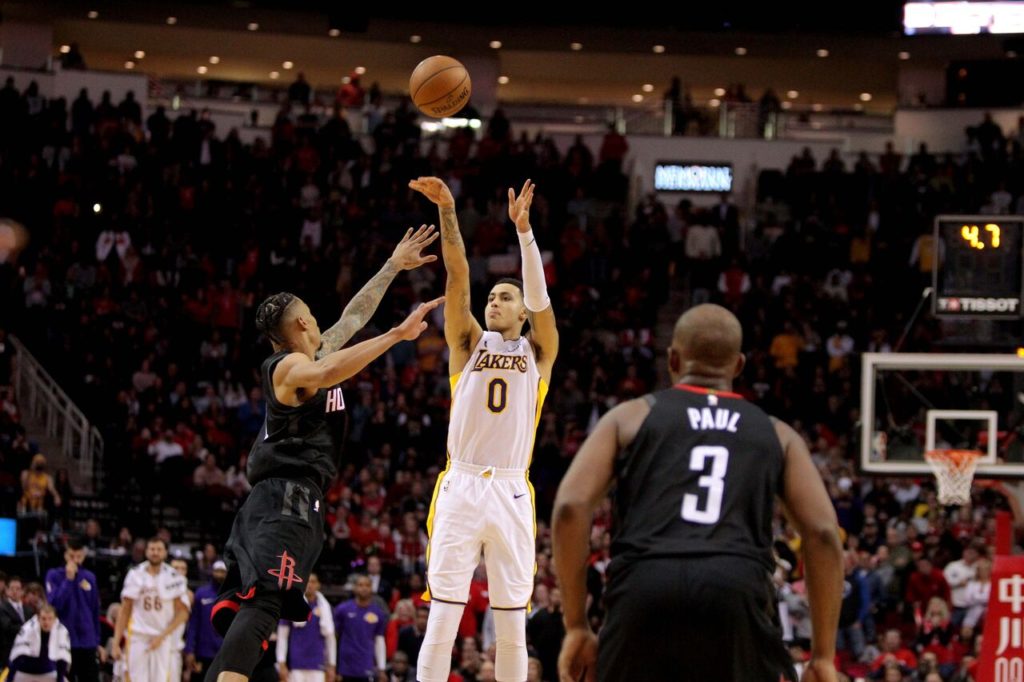 If LeBron James was the dominant headline for the Los Angeles Lakers this summer, the who’s and why’s of his supporting cast are at least at a B-story. That’s true for those coming off the pine just as much as the starters.

Here’s where the spit-balling begins, with a roster that has seen a massive overhaul in recent years. Case-in-point, not a single player remains from the 2015-16 Kobe Bryant farewell tour.

When training camp starts in September, there will be five new veterans including James, along with three rookies—all assimilating with what’s left of last year’s cast of characters. But while general manager Rob Pelinka has expressed excitement about all the starting spots being open (putting aside LeBron), you still have to wonder how much of that is real and how much is assuaging the egos of incoming vets who have been signed to one-year deals.

For the sake of argument (launch your arrows if you’ve got them), let’s assume that Kentavious Caldwell-Pope will continue to start and that Lonzo Ball’s ongoing journey will be with the front five. Let’s also slot in the continually improving Swiss army knife known as Brandon Ingram. And while there has been speculation that James will play some minutes as a small-ball 5, it’s highly doubtful he’ll be down on the block for the majority of his time. That leaves the very real possibility of JaVale McGee as a high-energy, short-minutes starter.

Here then is a bench mob list in speculative order, sans the obnoxious slide-show format that some click-hole sites continue to assault your operating systems with:

If McGee is the first to sub out, then James will likely slide over to the 5. It would thus make sense for Kyle Kuzma to be the first one off the bench. The No. 27 draft pick launched right out of the gate last season and never looked back. He tied with Ingram and Julius Randle as the team’s leading scorer, showed surprising alacrity from downtown and was named to the All-Rookie First Team. The Kid from Flint doesn’t buy the premise that LBJ might have to play a patience game.

“Having one of the greatest players of all time is going to raise what we do, raise our level of focus and the team to a higher level,” Kuzma said, per ESPN’s Ohm Youngmisuk. “I don’t really see why [there is a need to be] so patient.”

How will Luke Walton carve out enough minutes for Kuz on a crowded roster? We might see the rangy 23-year-old shifting down from power forward to small forward more often, a role he was effective in when subbing for an injured Ingram late in the season. Regardless, a big who can handle the ball off screens is a valuable commodity.

Suspend your disbelief in Rajon Rondo for now: cast aside his famously prickly nature and a chronic disregard for scoring the ball. This is a guy who will play a major role this season. He could even start any number of games for any number of reasons, including Ball’s relative inexperience—52 rookie appearances is a mere pittance for someone who’s supposed to be James’ chief facilitator.

Rondo has the smarts and the pick and roll know-how: over, under, sideways and down. He’s a tactical wizard with a career total of 6,608 regular season assists plus an additional 981 during his many postseason appearances. Love or loathe him, the much-traveled guard is a basketball delivery system who can make LeBron’s job easier.

Every coach wants a Josh Hart on their team. He willingly switches on defense, takes every possession like a personal challenge and can light up the scoreboard in a hurry. Hart is a legit two-way player who was encouraged to work on his ball-handling skills in Las Vegas and wound up as the summer league MVP.

There won’t be a problem finding a role for Hart: put him on the floor and he’ll instinctively head wherever elbows are flying. This is a stare-down, trash-talking dude who chases loose balls, can finish at the rim or nail the corner J with a quick, high release.

It would have seemed sheer folly at the start of free-agency to credibly nominate Michael Beasley for a significant role in Los Angeles. The Beas, after all, enjoys a longstanding rep as a knucklehead of the *highest* order. Regardless, he can accumulate points in a hurry.

“Michael Beasley is one of the hardest guys to guard in the NBA, that’s just fact,” notes assistant coach Jesse Mermuys, per Laker.com’s Mike Trudell.  “He’s one of the best 1-on-1 players in the league. With his size and his scoring ability, he’s tough. Having a guy like that on your roster is always beneficial. You always need a bucket getter.”

It should also be noted that Beasley played a meaningful number of his minutes as a small-ball center during his two tenures in Miami. Could he do the same in L.A.?

Ivica Zubac showed potential two years ago as an enthusiastic rookie with good hands and an instinct for blocking shots. But his minutes and overall prospects dimmed as a sophomore—seemingly slow or unable to adapt in a changing league.

That said, the Lakers kept their 7’1” prospect this summer while cutting ties with Thomas Bryant, a 6’10” rookie who tore up the G-League.  Zu—who dominated on Croatia’s national team this summer during World Cup qualifiers—could be the beneficiary of a center rotation without much depth.

Lance “Born Ready” Stephenson is the most obvious wild card on the roster. An ISO scorer with an emphasis on high-degree-of-difficulty, he thrives on chaos and has flamed out everywhere but Indiana. He now gets to roll the dice in Los Angeles.

It’s a tragic shame to place Svi Mykhailiuk so far down the list. The No. 47 draft pick is a silky smooth sharpshooter who can handle the ball and play some defense as well. He’ll get most of his burn in the G-League for now. He could also leapfrog his way into the Lakers rotation.

Alex Caruso is in his second year of a two-way contract. The pride of College Station has good size and plays a physical point guard game: setting screens, drawing fouls and rarely making mistakes. He’ll be able to fill in if either Ball or Rondo get hurt.

The Rest of the Pack

There’s a lot to like about Moe Wagner—the 21-year-old Big Berliner has some range on his jumper, crashes the glass with abandon and vocalizes up and down the court. But he’ll create most of his havoc in practice and with the South Bay Lakers this season.

Travis Wear went undrafted in 2014 and has been roaming the fringes ever since. He’s got good size and can knock it down consistently from long range. The Lakers are keeping him around on a two-way contract.

It is possible that Luol Deng could still help an NBA team. But he was put out to pasture last season by the Lakers, grazing on $18 million a year. It’s not really worth speculating further at this point.

It was a stunner when the Lakers brought 18-year-old German point guard Isaac Bonga stateside rather than stashing him overseas. The 6’9” incubator project will be developed carefully in El Segundo.

It has been five years since the Lakers last reached the playoffs. The arrival of the game’s biggest star has now changed everything, from intense expectations to the methodology of overall roster construction. Management is playing a high-level balancing act of integrating battle-tested vets who can provide playmaking support while preserving spending power for the future. At the same time, the exigencies bump upward for a young core whose development window just got a little smaller and a lot more transparent.

Walton and his staff will be at ground zero of this pressure cooker: managing a myriad of tasks from offensive and defensive schemes to convincing a wildly disparate cast of characters of the benefits of team togetherness and burden-sharing. It’s fun to spit-ball a deeper-than-average rotation during the lazy days of summer but the whole deck of cards gets tossed in the air once the season actually begins.