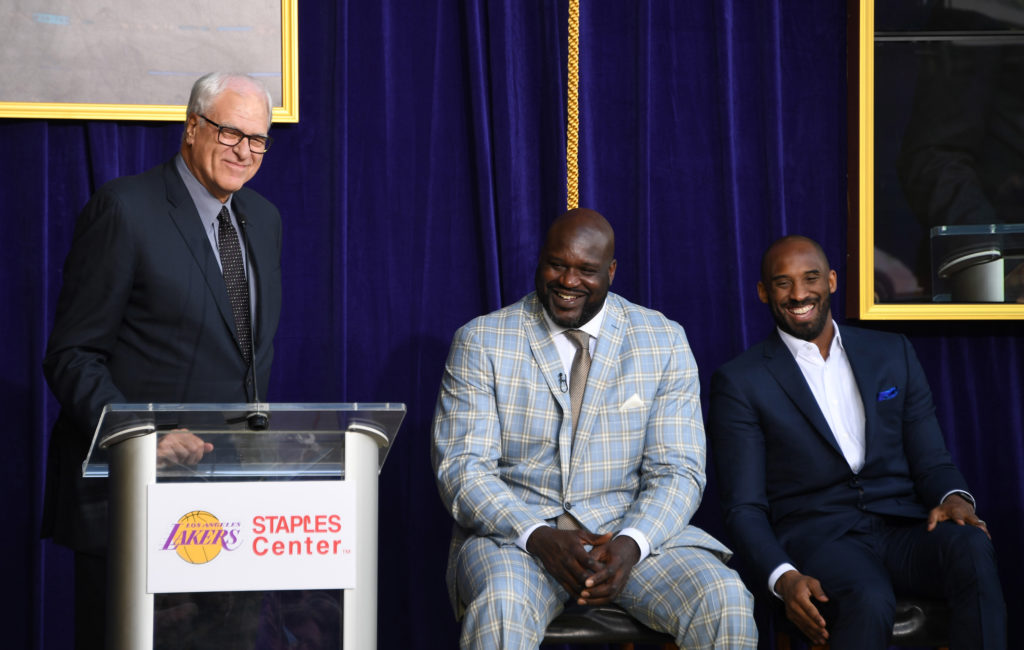 Basketball can be a fickle friend, for franchise stars who are ultimately consigned to the journeyman’s path and for systems, coaches and executives who fall out of favor for any number of reasons. Consider the case of Phil Jackson who disappeared like morning dew after his very public flameout as president of the New York Knicks.

Juniper and spruce, maple and yellow pine, pale birch trees with their dark eyes watching. Stony shores dappled with lichen and tiny blue crevice plants that segue to the looming cliffs above. There’s swamps and meadows, thickets of wild roses and brittle fern. Great blue herons stand in the shallows waiting for their prey. The staccato warble of grebes and the keening of hawks as they circle overhead, the songbirds in the morning and owls at night—all part of a rich tapestry. This is where Jackson has summered for over 40 years at his sprawling retreat at the edge of Flathead Lake. It is also where he has holed up since being fired by James Dolan more than a year ago. Jackson still keeps a beachfront home in Playa Del Rey but Montana is where he is currently recharging his batteries, contemplating his existence, wandering in the woods or whatever else a basketball legend does up there in the North American wilderness.

He was born in Deer Lodge, Montana but moved to the windswept prairies of North Dakota at a young age. That is where the son of Pentecostal ministers played high school and college basketball, ultimately going pro as a wild and wooly baller for the Knicks: winning a couple championships, wrecking his back and dropping acid. He immersed himself in Native American culture early on and never let go—burning sage and beating a tribal drum as an NBA coach. Six rings with the Chicago Bulls and five more with the Los Angeles Lakers. The last two banners came after a self-imposed sabbatical that was cut short when Jackson was called back into action. There was also his relationship with Jeanie Buss, beginning during his first season in Los Angeles and lasting more than 15 years. In his book The Last Season, Jackson wrote that Jeanie “took me in like a lost dog and nurtured and loved me.”

After the 2010-11 season ended with a loss in the Western Conference Semis, Jackson again hung it up, heading north for his annual sojourn with no intention of ever coaching again—he had repeatedly referred to “his last stand” throughout the season. His chronic pain—knees, hips and back—have long been revealed through his lurching, hobbled gait. He had also put off prostate cancer surgery until that summer.

The triangle offense was introduced to Jackson by Tex Winter while the two were Bulls assistants under Doug Collins. The system dates way back to Sam Barry who in turn taught it to Winter at USC. It’s a complex series of moving shapes that starts with the basic principle of ‘read and react’ and spins out into a seemingly endless number of options in which players maintain spacing and move the ball.  Over time, the offense and its philosophy consumed all parts of Jackson’s consciousness. As he would later write in More Than a Game: “Essentially, the triangle was a vehicle for integrating mind and body, sport and spirit, in a practical, down-to-earth form. It was awareness in action.”

But the age-old college practice of geometric hoops was never widely embraced in the NBA, despite all of Jackson’s successes. And, the game itself has continued to morph dramatically, to such an extent that even norms such as low post centers seem antiquated and quaint.

In early November of 2012, a rejuvenated Jackson was primed to return to the Lakers once again. Mike Brown had been let go after a 1-4 start to the season and the chorus of support for a guy with all the hardware was deafening. It included the likes of Dwight Howard, Kobe Bryant, Pau Gasol and even Magic Johnson who had recently led a group acquisition of the L.A. Dodgers. But it wasn’t to be—the sudden and unexpected hire of Mike D’Antoni left Phil stunned, Jeanie devastated and Magic in mourning.

In a forward-thinking scheme of things, the Seven Seconds or Less coach made some sense. He was, after all, an early architect of so many elements that are now staples of the game. But he may not have been the best choice for that particular team at such a rare and elusive moment in time, when so much hung in the balance.

It was the beginning of the end of an era: a litany of player injuries, the passing of grand patriarch Jerry Buss and a team that limped into the first round of the Western Conference before Kobe blew out his Achilles. D’Antoni’s run always seemed strangely snakebit in Los Angeles, he’d be out by the end of the following disastrous season.

There would still be periodic hints and whispers about a potential rapprochement between Phil and the Lakers, a position of some sort to utilize his vast knowledge of the game. But that was driven by Jeanie. A different reality had long been written on the wall—there was simply too much bad blood between Jackson, Jim Buss and Mitch Kupchak to wash away.

Instead, Jackson headed to New York City as the Knicks’ president, not coach. The warning signs for such a venture may have been in plain sight but the temptation was too much to pass up—an opportunity to return to the scene of his earliest championships, to establish a winning culture as an executive while still influencing how the game is played. It was the chance to get the hell out of L.A. where he had been so successful yet ultimately betrayed. There were risks of course, not only to his winning reputation but also to his relationship with Jeanie—long distance romances are notoriously difficult to maintain.

The first order of business was recruiting a sideline leader who could faithfully implement Jackson’s vision. But Brian Shaw was coaching the Denver Nuggets and Steve Kerr elected to join the Golden State Warriors. Jackson took a gamble on Derek Fisher who was only months removed from his player days. Fish would last a season-and-a-half with Kurt Rambis filling in thereafter on an interim business. Rambis was in turn followed by Jeff Hornacek—a round peg forced into a triangular hole. There were some highlights along the byzantine journey, not the least of which was the drafting of Kristaps Porzingis in 2015. But those moments were far outweighed by epic loss records and highly visible missteps.

In the end, Jackson lost the confidence of Knicks owner James Dolan and was fired. Mathew Kitchen summed things up for Rolling Stone:

Jackson was the last vestige of a bygone NBA he helped create. He won so much so quickly and so often that it would have seemed silly to change. He could always center his “creative” offensive system around hall of fame-caliber talent. But iso-ball is dead. The big man camped out on the block is dead—they shoot threes now. The triangle is dead. And Michael Jordan (probably) isn’t walking through that door.

Three years earlier, with Jackson safely ensconced in the Big Apple, the Jimbo-Kupchak brain trust had dialed back a real doozy: plucking Byron Scott from the dusty Showtime archives. What followed was a continuation of the team’s freefall woes featuring arm-crossed stoicism and a refusal to cave to such newfangled things like analytics and three-point shooting. Scott’s stubborn reign lasted two seasons.

Finding themselves at yet another crossroads, the Lakers’ front office tardily made the right move—stealing Luke Walton away from Kerr and the Warriors. Walton was the epitome of all that was new and progressive in the NBA while still owning solid connects to the past: son of Bill and quasi-son of Phil. But if Luke has often named Jackson as his most important coaching mentor, he has also willingly embraced the evolving nature of the game, due in no small part to his successes with Golden State as both an assistant under Kerr and a de facto head coach when Kerr was convalescing from botched back surgery.

During his first two years as the L.A. showrunner, Walton developed young players and established a pace-pushing, switch-happy system. He has also navigated the shoals of a shifting roster and a management shakeup—Jeanie brought in Magic and Rob Pelinka after finally dropping the hammer on bro Jim and Kupchak. Now comes an even steeper challenge: integrating megastar LeBron James with other new veterans on one-year deals as well as the remaining core of the next-gen brigade. The bar has been raised exponentially and the hoops world will watch with equal parts hope and malice.

In the obvious service of full-circle scenarios, there has already been fringe rumblings of what could become a restless drumbeat—First Take’s Stephen A. Smith recently opined that if Walton can’t get a James-led team over the hump, Jackson could conceivably get a call.

And while Smith’s extemporaneous foghorn riffs are best taken with a dash of salt, Bill Bradley—former U.S. Senator and Knicks legend—also won’t rule out the possibility of Jackson’s return to the NBA after his $60 million contract runs out in March 2019.

“His spirits are great,” Bradley said of his former teammate, per Marc Berman of the New York Post. “He’s finally getting his body in shape. He loves L.A., loves San Francisco where a lot of his grandchildren are. He still talks to people in the game. Right now he is under contract for the Knicks. [A return] is not in the cards now. After that, who knows?”

Even though some of Jackson’s acolytes came back to roost on the current Lakers staff, there’s little evidence to support a successful reemergence of the triangle. Yes, you can see fleeting glimpses in pinch posts, baseline cuts and kick-outs to the corner, but it’s a far cry from the full-throated embrace that the Zen Master would likely demand. In a cruel twist to his counterculture image, the maverick ultimately became immutable to the league’s changing ways. As Thomas Wolfe famously wrote, you can’t go home again—you can return to a place but not a place in time. Unless of course, the place is somewhere among the tall trees and the quiet solitude of Montana.

The ship has sailed, the game moves on and LeBron will be dishing and driving during his own last stand. James doesn’t follow the system, he is the system. During Jackson’s tenure in New York, did we ever see demonstrable evidence that he was ready to fully embrace a positionless small-ball game?

Despite all the reasons why this could never work again, there remains the inescapable fact that Jackson’s greatest strength was finding a way to align his players against everyone else. He had a certain swag, a bemused sense of cool that set him apart from his coaching peers. When PJ pointed and whistled—that piercing, split-finger siren call—his charges would willingly swarm down court like the dogs of war. Stars and role-players formed a common trust, breathing exercises happened and hoops became something sacred.

For now, the summer drifts by and kids and grandkids come to visit. There are canoes to paddle in, hammocks to lie on and trails to explore up there in the woods by Flathead Lake. And when the golden rays dim and the visitors leave, there will be snow and stillness and smoke curling from the chimney. Maybe that’s enough for a retired hardwood warrior. And maybe it’s not.