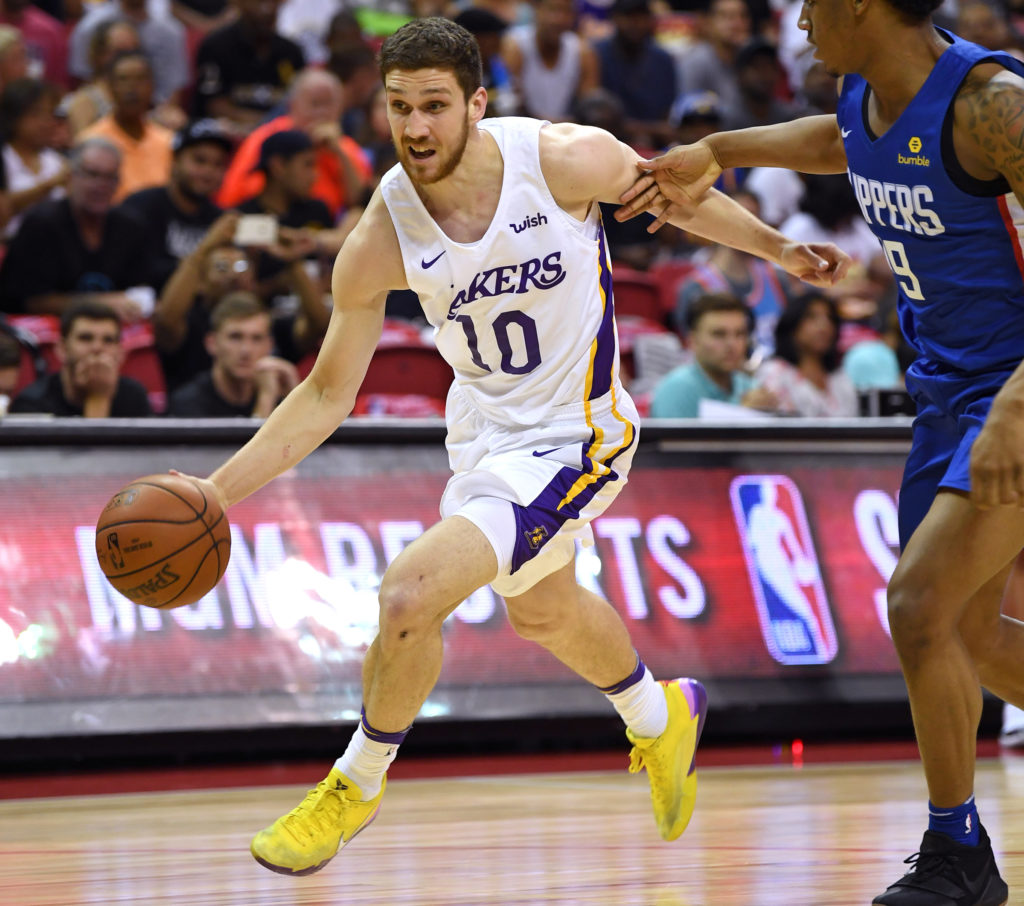 In the Vegas Summer League semi-final playoff victory over the Cavs, rookie Svi Mykhailiuk buried six (of his 11) three pointers en route to 31 points. And while he was somewhat overshadowed by Josh Hart’s game high 37 points in what continues to be a successful summer run, Svi’s overall play cannot be ignored.

Taken with the 47th pick in June’s draft, Mykhailiuk is looking like the Lakers latest draft steal.

When he was drafted in the middle of the 2nd round, he was thought of as a shooter, but claimed he could and would be much more than that. If you listened to him, he’d tell you he had some defensive versatility, some ball handling ability, and room to grow his overall game. Turns out, with a baseline of skills that are more refined than pre-draft reports implied, he’s right.

When the Lakers' coaches and front office say that Svi is "more than a shooter," this is what they're talking about.

Rebound in traffic > Pushes ahead himself > Loses defender with the spin > Strides past the rim protector with a Eurostep ??? pic.twitter.com/ZyXFbgzyh3

I mean, look at that play. Drops down from the weakside for board, grabs + goes, shows off his open court handle, and then a skilled finish around a big after measuring him up while going downhill. Those are real NBA wing skills and it looked totally natural for him.

Right before this sequence, someone on the Cavs bench yelled “He can’t guard you!” to the player covered by Svi.

Not only did Svi stay in front and help force the turnover, he proceeded to hit a pull-up 3 in his face on the other end. pic.twitter.com/E2CRBGTZP0

Working in isolation defensively he’s able to hold up in space to the point where he’s perfectly position to not only halt a drive, but contest a would be jumper which then turns into an errant pass. After securing the loose ball, he pushes the ball, surveys the floor, and then uses a nice drag screen to setup his smooth jumper.

Svi is another example of why it's important to scout prospects outside of their collegiate/club system. As I wrote last summer, Mykhailiuk showed us his shot creation potential @ U20s, with 38% of his offense coming in PnR/ISO as opposed to 12.7% as a SR. https://t.co/UXycjcysQy pic.twitter.com/1XeUxsyWvn

The clip starts with the same pull-up jumper already highlighted, but the rest of the plays are, in order:

We can often look at summer league as lacking value and not indicative of what a real player’s ability is. We discredit good performances and openly question whether what a player shows can translate to actual NBA games.

While this can be fair, I think we also need to better discern exactly what we’re watching and make determinations about a player’s ability based on whether or not what we see is NBA level skill rather than reduce things solely to the level of competition a player is facing.  And what we’re seeing from Svi looks to be more the product of him having that level of skill rather than him solely having success because some of the players he’s facing won’t get actual NBA minutes.

Which, when put into the context of where he was drafted, is even more impressive.

Here’s the thing, too: it’s not like Svi is working from a standpoint of all these limitations or lacking tools. Yes, he has a negative wingspan so he lacks length. But he has good size, bouncy/quick feet, has good athleticism, and a quick release on a very accurate jumper. These are needed NBA skills/tools for a wing and he has them.

I’m not going to pretend Mykhailiuk, even with all I’ve said above, has a rotation spot waiting for him. The Lakers suddenly have a surplus of wing players and any combination of Lonzo/Rondo/KCP/Hart/Ingram/Stephenson/Kuzma/LeBron will all play on the wing this season in various combinations at PG/SG/SF/PF. There’s not a lot of minutes to be found when accounting for all those guys.

But, in similar ways to Kuzma last season (though not to the same level), Svi is showing NBA level game and he should at least get the opportunity to see if what he’s doing now can translate when the competition gets tougher. He’s acing his first test and that warrants more chances when the pre-season comes. Where he goes from there remains to be seen, but I would not be surprised if he continues to show he can, in fact, be more than a shooter.