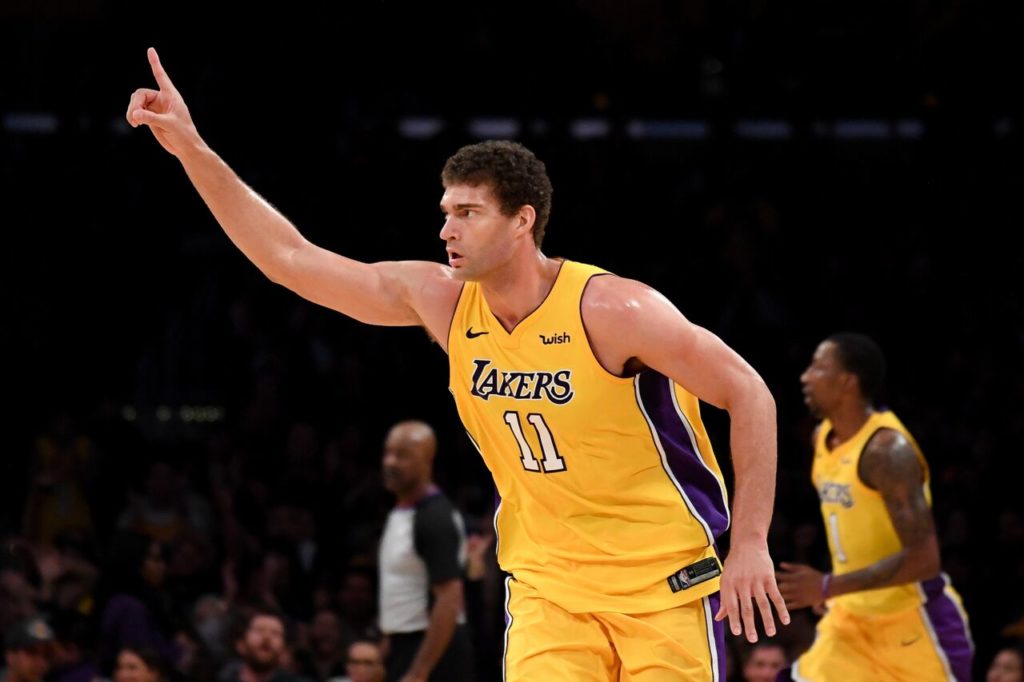 The Lakers flurry of free agent signings has ground to a halt. After the moves made a week ago to renounce Julius Randle and sign Rajon Rondo, the front office has seemingly put their phones on airplane mode while hoarding their remaining $5.5 million in cap space and clinging to their two final roster spots (the team is now up to 14 roster spots after signing Isaac Bonga and with a placeholder for Svi Mykhailiuk) in order to add at least one more player.

Many assumed that cap space and roster spot would go to Brook Lopez. Yes, the Lakers could be holding that space to facilitate a trade in their hunt for more stars, but bringing Lopez back was almost presumed a given. On Sunday, however, that was proven incorrect as Lopez departed to Milwaukee in free agency:

Sources: Lopez agrees to a one-year deal at the bi-annual exception. https://t.co/MIKJKiP33L

On a one year deal at that price, I can only assume if the Lakers actually wanted Lopez back he’d be back. A key part of every non-LeBron free agent signing the Lakers have executed is that they’ve been for only one year. And, as noted above, the money Lopez signed for is significantly less than the money the Lakers have left to offer a free agent. Put two and two together and you can only come to the conclusion I’ve come to.

I should say this up front: I wanted Lopez to return even before I saw the terms of his new contract. After I saw the terms, I was legit disappointed. Lopez can be somewhat of a divisive figure among Lakers fans (what player isn’t?), but I believe the full scope of his contributions will be missed.

His shooting opens up the floor for his teammates, he’s a underrated rim protector defensively, his contributions as a box-out guy on the defensive glass allows grab-and-go players to flourish and aids in the Lakers want to push the pace, he’s an intense competitor who also offers levity in a locker room…he’s just an overall good guy whose skill set is valuable to the construction of this specific Lakers team.

Now he brings that package to the Bucks and the Lakers will be left with a platoon in the pivot which includes JaVale McGee, Ivica Zubac, and…rookie Moe Wagner.

Taken on its face, this seems less than ideal. And while I’m not going to try to spin this as some boon for the Lakers, what I can say is that this group does offer an interesting mix of skills, on both ends of the floor, which makes them a good trio for a by-committee approach at this spot.

McGee is the athletic one who plays with good energy; the rim-running, lob catching, shot blocking one with the springy legs. He offers vertical spacing in the pick and roll, does not need “touches” to be effective on offense, and will finish in the paint — especially when he catches the ball on the move. In minutes against more traditional bigs and defensive schemes which do not switch P&R’s, McGee can be nice option in 5-7 minute bursts.

Zubac is the more traditional big. He can post up and finish with either hand. He can be a P&R threat both as a dive man or when popping into space for a 15-20 foot set shot. He has shown some ability to defend the rim and hedge + recover in the P&R, but has not shown the ability to switch and defend on an island versus NBA level shot creators on the wing. He has good feet, good to very good hands, and understands offensive concepts well (spacing, how and where to relocate to create passing angles, etc).

Wagner is the wildcard here and all we know is what we’ve seen of him in college and summer league. But, from what we have seen, he’s an intriguing offensive player. He has range beyond the three point line on his jumper and shoots it with an easy, smooth release. He already understands how to use the threat of his jumper to attack closeouts and can create shots in isolation with a nice first step and counter moves off the dribble. He hustles all over the floor, showing nice activity in the passing lanes, on the defensive glass, and changes ends well to be threat in transition offensively.

They also all have real flaws and there’s no amount of negotiating them that will make them disappear. Be it focus, ability to stay on the floor, general athleticism, youth, shooting, etc, etc any of them could be guys Luke Walton wants to pull within moments of when they get put into the game. The question, then, is whether the Lakers have enough on the rest of the roster to compensate enough for these flaws to make any of these players end up being net-neutrals during their respective runs. That remains to be seen, but if you’re doubtful, that’s fair.

The rules of the game and the shift in emphasis toward shooting, skill, and defensive acumen all over the court have made playing C for long minutes harder than ever. The rules used to favor big men and the list of all-time greats reflects that. Now, though, it takes a unique talent to be able to play 30+ minutes a game from that spot and more teams are moving towards diversity in lineups which feature multiple guys who can fill into this role.

From this standpoint, the Lakers do have options. I wish they had a “small-ball” C in their tool-box, however. Julius Randle would have been boxed in to this type of role, but now the only guy on the roster who can capably fill this spot would be…LeBron. And while I hope to see him playing some small-ball 5 against lineups where PF’s slide up to that spot, we’re going to have to wait and see on whether he’s actually amenable to that. History tells us he won’t be. But we’ll see.

Lastly, depending on what happens with the last two roster spots, I will be interested in seeing if the Lakers sign Channing Frye as a 4th big man. He too is a limited player who offers some of the same flaws the Lakers bigs already possess, but his shooting can be really helpful and if he’s a once-every-few-games type of player on a minimum contract, there’s worse ways to use a roster spot.